America, unfortunately, has a weight problem. As a country, we’re pretty flabby.

Government health statistics show that more than 70 percent of Americans are considered overweight or obese.

Lorelle Cicitta is committed to doing something about it.

“I believe in the idea of taking fitness in your own hands,” said Cicitta, the 27-year-old owner of Forza Fitness at 3514 Landis Ave. in Sea Isle City. “Exercise is for life, not for looks.”

For the past four years, Cicitta has been helping people of virtually all ages get into shape at her workout studio. Forza Fitness offers aerial yoga, boxing classes, massage therapy, personal training and chiropractic treatment. 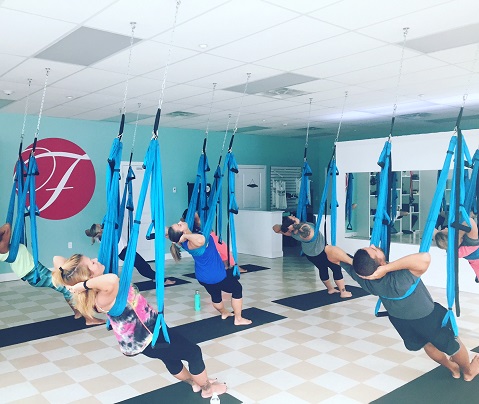 Cicitta’s clients range in age from the mid-20s to mid-70s. On some days, she has 75-year-olds working out in her boxing classes.

On other days, you’ll find her aerial yoga students stretching or hanging upside down in “inversion swings” that help to relieve pressure on their back, joints and ligaments.

The hammock-like inversion swings hang from the ceiling and are made from the same fabric as parachutes. Cicitta explained that aerial yoga is particularly therapeutic for people suffering from back injuries.

“We do a lot of injury therapy,” she said. “It’s huge for sciatic issues or lower back problems.”

Forza Fitness serves a variety of clients ranging from local residents to tourists to people who have vacation homes in Sea Isle. Cicitta said the studio has a friendlier, more relaxing atmosphere than the crowded mega-gyms operated by fitness corporations.

“It’s almost like a small-town atmosphere in here,” she said. “We’re very inviting for all levels of people who want to feel strong and get in shape.”

With the holidays coming up, people may want to pay close attention to staying in shape. Cicitta said there is no reason for anyone to feel bloated from the big holiday meals. 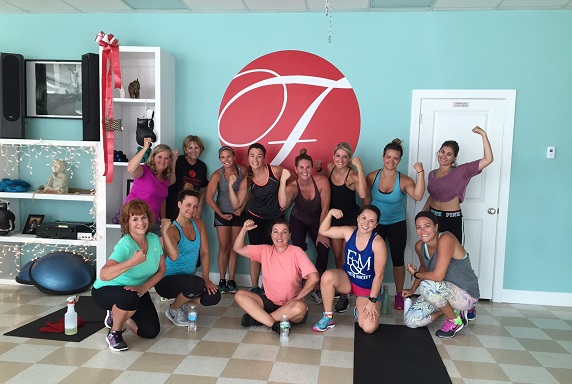 The desire to lose weight – and keep the extra pounds off for good – often tops the list of New Year’s resolutions. Cicitta, however, said people should concentrate on developing true fitness goals instead of worrying about trendy resolutions for the New Year.

“Everyone makes New Year’s resolutions. I don’t believe in resolutions,” she said. “I believe in personal goals – short-term and long-term goals – that you can see yourself hitting. It’s like us holding hands with you to help you hit that goal.”

Cicitta views physical fitness as a lifelong commitment. She stressed that getting, and staying, in shape doesn’t mean that people have to put themselves through a grueling exercise regimen every day.

“It’s not just a workout or killing your body. We’re trying to bring fun to fitness here,” she said. “My main goal is to have people feel good in their own body.”

The name of Cicitta’s business was inspired by the word “forza,” which means strength in Italian. Cicitta started Forza Fitness in 2012 when she was only 23.

She inherited a passion for physical fitness from her parents. Her mother was a personal trainer who ran a workout studio in the basement of her Bergen County home. Her father was also a fitness buff who encouraged Cicitta to work out with him.

“It was always in my genes, working out and being competitive,” she said.

She proudly recalled how she made the varsity softball team at DePaul Catholic High School in Wayne, N.J., when she was only a freshman. Cicitta competed in bodybuilding symmetry contests while she was at Stockton University in Galloway Township. An accounting major, she graduated from Stockton in 2010.

Her fitness career began when she was asked to be a personal trainer while competing in bodybuilding during her time at Stockton. She later became the head trainer at a South Jersey gym. Her experience as a trainer helped her to launch Forza Fitness.