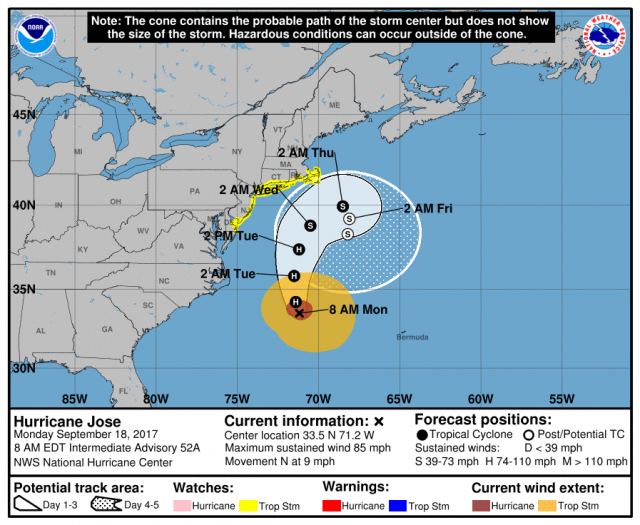 Jose will pass well east of the NJ coast but the effects will still be felt in Sea Isle City. Jose looking more like a Nor’easter than a Hurricane, will make for a windy and wet Tuesday. As a result, a tropical storm watch is posted for the entire NJ coast for the potential of tropical storm force gusts. Even though Jose will pass over 200 miles offshore, it will be close enough to give us a some rain and gusty winds for Tuesday. 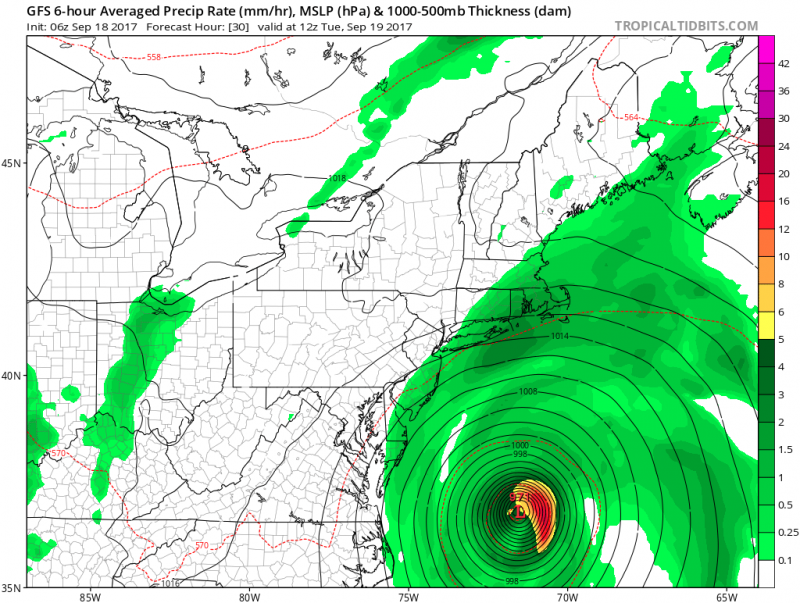 Wind gusts will be mainly confined to the coast of New Jersey and could reach tropical storm force gusts (greater than 39mph). 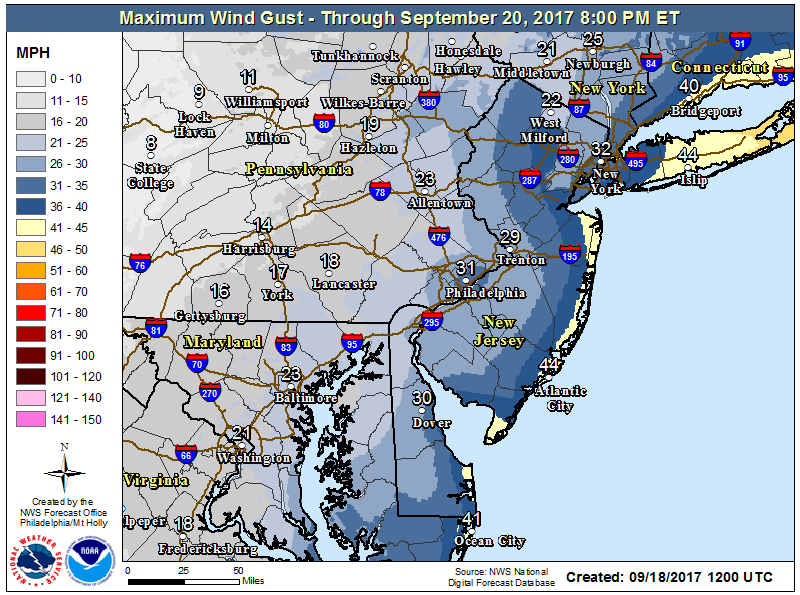 The main impacts from Jose will be the dangerous surf and riptides. A high surf advisory is in effect with waves increasing up to 10 feet on Tuesday.

Coastal flooding will also be a concern due to the persistent onshore winds and high astronomical tides. There will be 4 high tides cycles from Monday night through Wednesday morning with the potential for minor flooding. Tuesday evening high tide could approach moderate flood levels which will cause the usual roadways along West and Bay Avenues to flood. 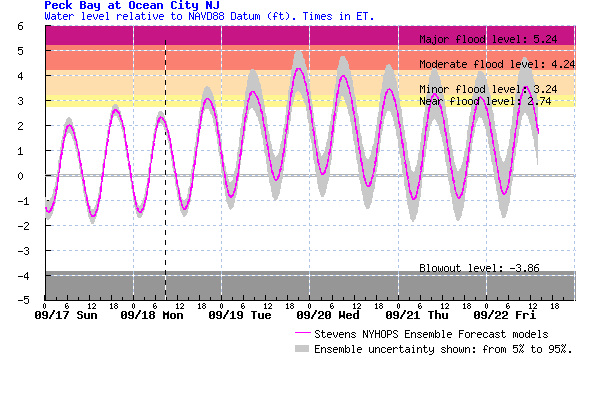 Jose will not be quick to exit. Weak steering currents may actually cause Jose to due another loop off the Northeast coast. As with any looping storms, the exact track of the storm is difficult to determine. Computer models actually loops Jose back to the coast but it could be a shell of its former self as weakening is expected through the next several days. 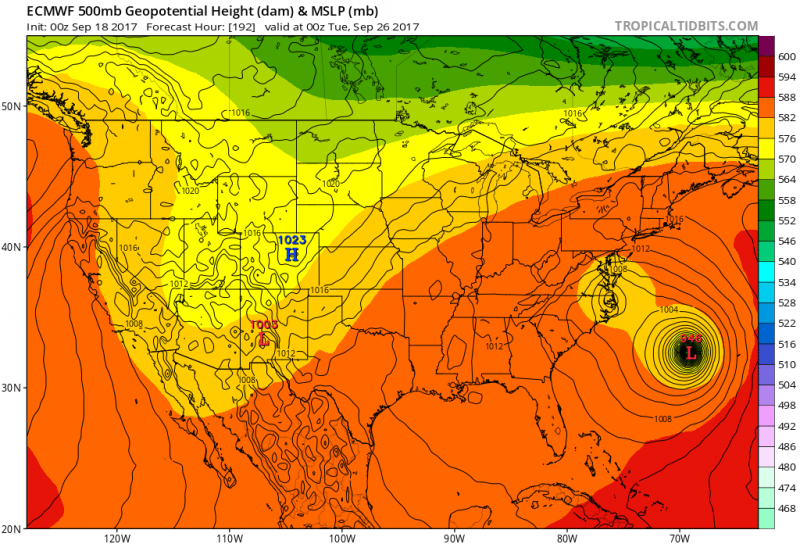 Computer models shows a weakened or remnant Jose looping back into the Mid-Atlantic and Hurricane Maria just to the east of it. (Courtesy:tropicaltidbits.com)

Hurricane Maria which will have major impacts in the Leeward Island and Puerto Rico bears watching into next week. The position of Jose, if its still around could have major implications of where Maria is headed. We will continue to watch as we move through the week. Regardless, rough surf and dangerous rip currents will most likely continue into next week. 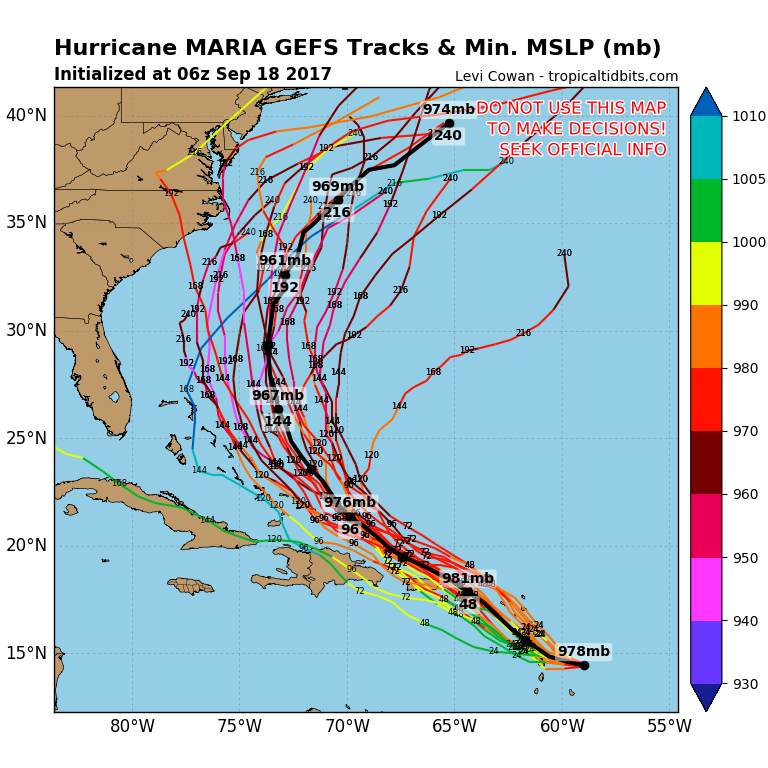 Computer models show a wide spread of solutions of the future track of Maria. (Courtesy:tropicaltidbits.com)