Earlier this week, the Cape May County GOP candidates and supporters hit the ground running as they began their campaign activities heading into the November 2019 election. On Wednesday, they celebrated the grand opening of their campaign headquarters at 601 Main Street in Middle Township. Additionally, the Ocean City Republican Club hosted their welcome back meeting featuring the candidates for both the legislative and county races, Michael Testa, NJ State Senate, Erik Simonsen, State Assembly, Antwan McClellan, State Assembly, Gerry Thornton, County Freeholder and Marie Hayes, County Freeholder.

“We have a great slate of candidates from top to bottom of column one”, said Marcus Karavan, Chairman of the Cape May County Republican Organization. “They are driving a positive message of lower taxes, smaller government and real economic opportunity for our residents.”

Middle Township Mayor, and Cape GOP Vice-Chairman Tim Donohue commented,” It’s great to see such a large and enthusiastic turn out for the ribbon Cutting of our headquarters right here in Middle Township.” “We firmly believe that elections are won on the ground and the folks here today for this ribbon-cutting, the ones who stuff the envelopes, make the phone calls and knock on the doors, will make the difference when it comes to winning or losing on election day and we all look forward to putting our efforts into a higher gear over the next eight weeks.”

Tuesday, the Ocean City Republican Club held their “Welcome Back” membership meeting at the Ocean City VFW. The group welcomed Mayor Jay Gillian, who gave a comprehensive update of completed and ongoing projects and initiatives that have been in the works since the spring. “I applaud the members of City Council for working so hard for our residents and visitors throughout this very busy summer season,” said Gillian. “We truly are America’s Greatest Family Resort.” The group also were addressed by club president, Gary Jessel, who introduced the entire slate of candidates. The candidates gave a brief overview of some of the initiatives they have been focused on as they meet voters throughout the district. 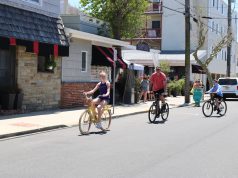