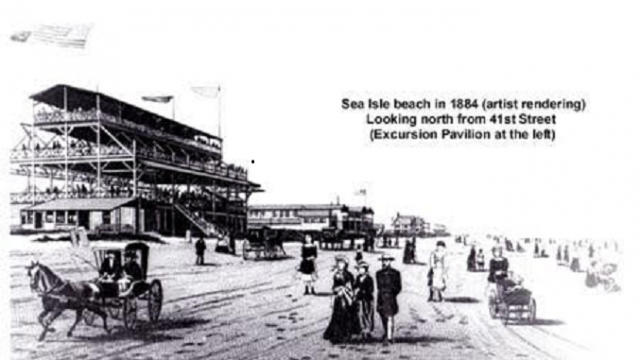 Present-day Excursion Park at JFK Boulevard and the beach was not always an open field. It was once the site of the most popular building in Sea Isle, called “Excursion House.” This three-story pavilion was originally built for the 1876 Philadelphia Bicentennial Celebration. Following the Bicentennial, the structure was dismantled, hauled to Sea Isle, and reassembled in 1882. It was owned by the West Jersey (Pennsylvania) Railroad and was just a short walk up Ocean Avenue from their new railroad station.

Excursion House began as an open pavilion for visitors to enjoy the cool ocean breezes and to eat their boxed lunches – the original “shoobies.” A widow’s walk was added at the top to give people an unobstructed panoramic view of the entire city.

Excursion House became Sea Isle City’s community center. The second level, with its hardwood floor, provided space for dancing and sports such as basketball and boxing. For years the building was the site of the lifeguards’ annual summer dance. At various times there were stores, a movie theater, and a roller skating rink on the first level. A youth center was added in the 1950s. One of the more interesting venues was Mr. Travis’s Game of Chance – a roller skate with a little clown attached that went back and forth in a track with numbers to bet on, like a flat wheel of fortune.

The building’s prime location at the beach proved to be its undoing. Storms such as those of 1920 and 1944 produced significant, but repairable, amounts of damage. But it all came to an end during the devastating nor’easter of March 6, 1962 when the structure was turned into a pile of rubble. One observer reports seeing the roof lifted off in one piece and deposited in a vacant lot behind the building. Excursion House was great fun while it lasted – and it had managed to last for 80 years.

The information presented here was extracted from literature and photo collections in the Sea Isle City Historical museum.  Please visit the museum at 48th Street and Central Avenue (on the first floor of the Sea Isle City Library). Access our website at www.seaislemuseum.com. Call 609-263-2992 with any questions. Current summer hours are 10:00am – 3:00pm Monday, Tuesday, Thursday, Friday and Saturday, plus 6:00pm – 8:00pm on Monday.