Police work isn’t exactly described as fun. It is considered hard and rewarding and only an occupation for those brave enough to risk their own lives to help others.

But Sea Isle’s first-ever Police Summer Camp for middle-school age kids from the resort and surrounding areas promises excitement, entertainment and a glimpse into the lighter side of policing.

From July 29 through Aug. 2, from 8 a.m. to 4 p.m., children will be able to enjoy an array of activities. They will visit the Cape May County Police Academy in Cape May Court House to meet with officers and take a tour. On another day, they’ll head to Morey’s Piers in Wildwood for an outing of rides and attractions.

They will even take a boat ride, go ziplining, hang out with the Sea Isle City Beach Patrol, take some surf lessons and learn how to make pizza.

The camp will culminate with a barbecue and games. Then on Aug. 6, National Night Out, there will be a camp graduation.

And those are just some of the things that will pack the camp schedule.

The camp is quickly filling up. There are 25 slots and only nine remain open, said Police Sgt. John Saltzman, the organizer of the camp.

Saltzman said the camp is a great way for police to provide a positive influence on children going into sixth, seventh and eighth grades.

Parents and guardians can complete an application at the Sea Isle Police Department at the records window through Monday, July 1. There is not a specific fee, but a $20 donation is requested to participate in the camp.

Police Chief Tom McQuillen said the camp lineup has so many interesting and exciting activities for the kids to participate in.

“If I was a kid, I would love to go to this camp,” McQuillen said. “It’s that much fun. Every day there is stuff to do.”

The entire camp was funded through donations from businesses. The major sponsors are 1st Bank of Sea Isle City and Smeltzer & Sons Lawn and Garden in Cape May Court House.

“No taxpayer money is being used. The sponsors gave generous donations,” McQuillen noted.

McQuillen also praised Saltzman for putting the camp together.

“This was his baby. He filled in all of the gaps. It’s going to be a home run. We want to see it succeed and I think it is going to,” McQuillen added. “All of the hard work by Sgt. Saltzman will pay off for years to come.”

And although some of the camp festivities don’t have much to do with police work, the children are a bit too young to even be considered for a position in the Sea Isle Police Department anytime soon, McQuillen joked.

“This is just another way to connect with the kids,” he emphasized. “It gives us five days of community outreach with kids and helps us build a lifetime of relationships.”

“Chief McQuillen feels that community outreach is a very important tool for police departments – including reaching out to youngsters,” Custer said. “The summer camp program is one more way that children can enjoy their time in Sea Isle City. Plus, they can get to know our officers, learn important lessons and have fun doing so.” 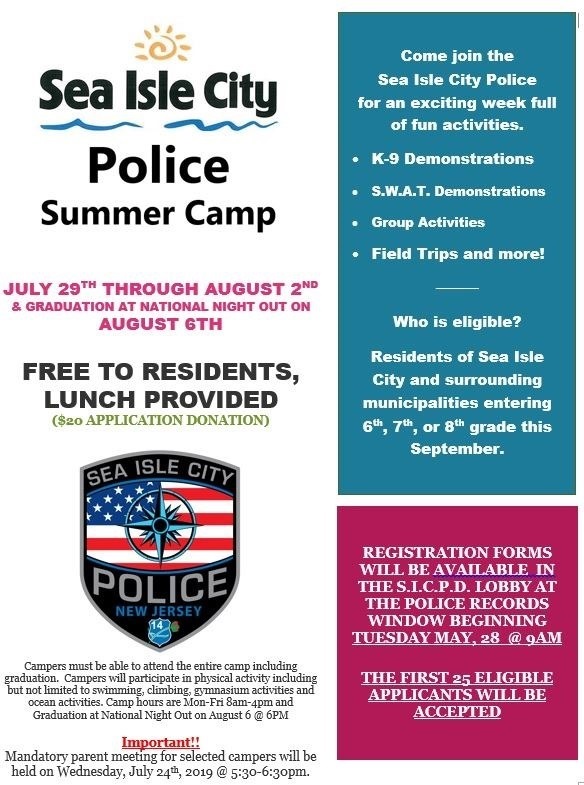