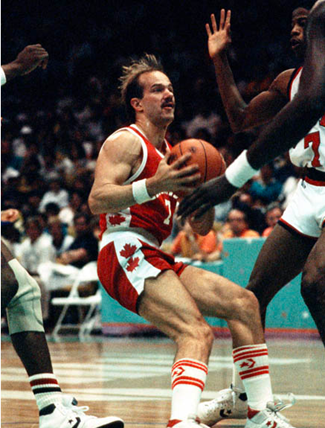 Karl Tilleman is well known as a retired international basketball player who played for the Canadian Men’s National Team from 1981-1984 and 1986- 1988. Throughout this time, Karl competed against top talent internationally such as skilled players Michael Jordan, Charles Barkley, and Karl Malone. Karl also became a two-time Olympic athlete, earning several accolades and accomplishments in the process.

Like any player who has seen success in their sport, Karl Tilleman enjoys looking back at some of his previous highlights to see how far he and the sport have come. Here, Karl explores a few of his favorite career highlights that define his years as an international basketball player.

In a must win first round match against Uruguay in the 1984 LA Olympic games, Karl Tilleman made important contributions that helped his team take the victory. Canada faced fierce competition from key players on the Uruguay team such as Wilfredo Ruiz and Hebert Nunez, who had a combined 53 points. Commentators were extremely excited about Karl’s play during this match as many expected great things from him after his success in previous basketball seasons as Canada ran away with the lead to beat Uruguay 95-80.

Karl Tilleman played a vital role in Canada’s 78-72 win versus Italy in the quarterfinals of the 1984 Olympics. One notable detail about the game is that Canadian commentator and basketball hall of famer, Bryan Heaner, commented that Canada had never seen a finer shooter while watching Tilleman’s performance— a point that would be made several times throughout Karl’s career. Karl had a great game against Italy, tying for third leading scorer on the Canadian team with 10 points on only 17 minutes of playtime.

While Canada may not have won the bronze medal match against Yugoslavia in the 1984 Olympics, both the team and Karl Tilleman had an impressive showing and left it all on the court. One thing that Karl remembers about the game is that ABC’s Keith Jackson was intent on commenting on the level of play he was exhibiting against a strong team that was playing tremendously on defense. Karl had the second most points on his team in the bronze medal match with 13, with commentators noting that he likely led the Olympians in points scored per minute of playtime.

In a 1986 game against Montana State at their home court Worthington Arena, Karl Tilleman scored 50 points—marking a record for most points scored at the stadium in a single game. Karl notes that the Montana team was exceptional that season, winning the Big Sky Conference and standing as undefeated on their home court. Montana’s solid play throughout the game only makes Karl’s performance stand out more in sports fans’ memories as a night where almost anything went in against a powerhouse team.

In the 1988 Summer Olympics held in Seoul, South Korea, Karl Tilleman set the Olympic record for most three pointers in a single game (10) while playing against Spain. Notably, Karl still holds the record, which has been tied twice since. Oscar Schmidt of Brazil tied the record in 1996 against Puerto Rico in a 45 point showing. Years later, Carmelo Anthony would also tie the record himself in a 2012 Olympic game against Nigeria.

An interesting piece of information from the game is that Karl scored 21 consecutive points against the Spanish team, who had built a reputation after being awarded the Silver Medal in the 1984 LA Olympic games. Tilleman himself scored 37 points while shooting 63% from the three point line.

In 2008, Karl Tilleman was inducted into the Albert Sports Hall of Fame in honor of the contributions he has made to Canadian men’s basketball over the course of his storied career. Commentators spoke to a few of Karl’s accomplishments such as being named First Team All-Canadian Honors four times, earning the Mike Moser Memorial Trophy as most outstanding male university player in Canada for back to back years, and helping Canada take Gold in the 1983 World University Games in Edmonton. It was mentioned how many of Karl’s scoring achievements were made before the introduction of the three-point line in international basketball associations, a fact that makes many of his accolades even more impressive when looking back.

In February of 2020, Karl Tilleman was inducted into the Canada West Hall of Fame. As part of his induction, commentators pointed to several accolades and acknowledgements that Karl has accumulated throughout his career as one of the most prolific scorers in Canadian men’s basketball history. Of the acknowledgements, it was noted that Tilleman graduated as the Dino’s lead scorer with 2050 points and became the first Dino to be named CIAU Player of the Year in 1982. Commentators also noted that Karl Tilleman was the three-time CW player of the year from 1981-1983, two time Calgary Athlete of the Year from 1981-1983, stood as a two-time Olympic athlete for Canada in 1984 and 1988, and was voted Dino’s greatest athlete of all-time in 2007.