The evening of March 10th was a night to remember. Ocean City High School held their annual “Mr. OCHS” competition, in which upperclassmen from the high school compete in an almost Ms. America like way, showing off their talents, casual wear, and lets not forget, their fitness abilities.

The event started off with each contestant being escorted in by a person (or people) of their choosing, and ranged from family members, to teachers at the school. One contestant was even escorted by a friend who played the bagpipes! All of the men gathered on stage for their opening dance. Contestants have practiced their group dance for the past two weeks, perfecting every step. The dance went off without a hitch and got plenty of laughter going to put everyone in a good mood.

After the dance contestants were called out one by one to pull a question from a hat. Once chosen, they would give their question to Mr. John Bruno, a teacher at the high school and the master of ceremonies for the night. Questions were classic personality questions like “Who is the most beautiful person in the world, both inside and out?” and “What would you do if you won the lottery?” but that didn’t mean the answers were quite as classic. The jovial mood continued through the questions.

The night continued on to mention the judges, a group of notable yet impartial individuals from around the community were chosen. After the judges were introduced they got to see the contestants perform a group fitness routine, which fit in with the rest of the night, being very comical. Both attire and performances were a sight to behold.

Up next was the longest and possibly most entertaining part of the night, the free expression and talent competition. Performances for this portion of the show ranged from singing original songs, to reenacting skits from famous movies, and even involved a bit of sign language! One contestant, Andrew Donoghue, even made a romantic gesture to his sweetheart, by asking her to prom during his skit.

Up first for the free expression portion was Jake Smith. His portion of the show involved a motivational speech given to him by his father, followed by Jake singing, accompanied by drums. Following Jake was Michael Bebe. Michael’s talent is signing a medley of songs, while partially changing costumes to fit the song that was playing. The third act, Jacob Davis, sang a song about his last 4 years at OCHS while playing guitar as well. The next act was Kevin Catanoso, who sang a song about “the typical Tuckahoe love story,” which was accompanied by fitting pictures on a drop down screen behind him. A reenactment of a scene from the movie The Sandlot was next. Contestant Andrew Donoghue, with the assistance of a few friends, performed a well-known scene from the movie. Complete with beach chairs and attire. The scene ended, but was followed by Donoghue stating that he was “not done yet!” In similar spirit of the skit, he asked his “lifeguard” to prom. She said yes!

The next act was a hilarious spoof audition for the famous exotic dance troupe “The Chippendales.” Eric Levai was the one who donned the famous costume, consisting of black slacks, a sleeveless white dress shirt, and a black bow tie. About 30 seconds into his “audition” the shirt was thrown to the side. The next contestant was John Riordan, who performed a humorous skit entitled “An Awkward Night at the Movies.” Just before he went on stage, the show was interrupted by the “Sexy Sax Man” who gave us a little song and dance, before being chased off stage. Patrick Kistler was up next. His free expression selection was another dance/skit, one in which he was trying to win over the girls at the beach. The last act of the free expression was Matt Matzler, who presented a skit entitled “Teh Umazing Wol.” In this skit, there was a magical wall, which would accept anything you threw over it, and offer an improvement on the item when returned.

After the hilarity of the free expression and talent portion, the contestants showed off their casual wear. This included everything from pajama pants to a T-Rex costume so needless to say, the humor wasn’t gone. After the casual wear, the contestants performed their finale dance as a group. Following this there was plenty of thanks for the judges, the tech crew, the stage crew, the cheerleaders and their coach, and of course the lovely girls who ran the show along side Mr. Bruno. The judges thought long and hard during this time, and the audience was asked to choose their favorite contestant via a QR code on the bottom of their programs.

The winner of the people’s vote was Michael Bebe, with a great performance and funny answers to questions, he was bound to win over someone’s heart. The second runner up was Eric Levai, who accepted his prize with a huge smile. First runner up went to Jake Smith, looking like he was on top of the world when accepting his prize. Finally, the winner of the 2017 Mr. OCHS competition, was contestant John Riordan, who accepted his new title, and crown from last year’s winner. 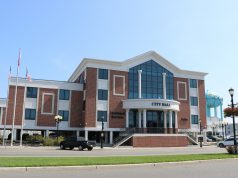 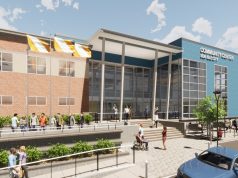