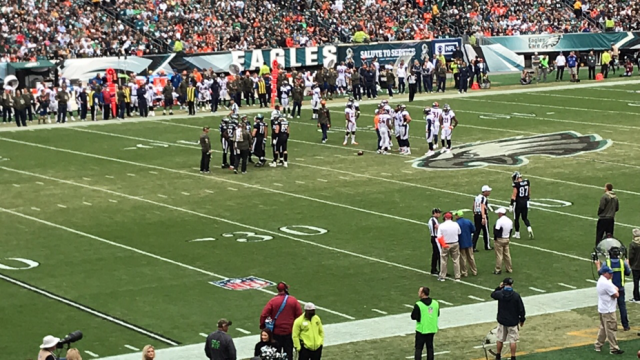 You can do it. Say it with us now. Say it loud and say it proud: “Super Bowl.”

Didn’t that feel good? It should, because it appears your 2017 Philadelphia Eagles are ready to pay off on your optimistic good faith.

Sunday’s 51-23 demolition of the Denver Broncos (3-5) took this giddy Eagles season to new heights. Everyone expected the Birds to improve on last year’s 7-9 mark, but before the bye week?    Now, Eagles fans have two full weeks to dream the dream before a huge Sunday Night Football showdown at Dallas.

Even history, rarely kind to the Eagles, points to a good place. The other three times they went 8-1, the Eagles won the NFL championship (1949 and 1960) or made it to the Super Bowl (1981). After splitting their first two games, Philadelphia has now won seven straight to post the best record in all of football.

It’s not just that the Eagles are winning it is how, in dominating fashion despite a rash of injuries to such key players as All-Pro left tackle Jason Peters, and all-purpose running back Darren Sprouls among others.

Each time a man goes down, his replacement fills the void and then some. This week it was veteran backup tight end Brent Celek who turned back the clock and combined with Trey Burton for five catches for 80 yards and a TD.

Second year quarterback Carson Wentz continued to build on what could be an MVP season with four touchdown passes in only three quarters of action. Wide receiver Alshon Jeffrey dropped several catchable balls but caught six, including five for either a fist down or a TD.

Earlier in the week, General Manager Howie Roseman stunned the fan base and sent a message he is going for all the marbles this year by trading a fourth round draft pick to acquire Pro Bowl running back Jay Ajayi from the Miami Dolphins. All he did was gain 77 yards on eight carries, including an electrifying TD run.

Then there was South Jersey’s own Corey Clement from Glassboro — on the bubble to even make the roster at the end of training camp — who scored three touchdowns.

As one could imagine, the scene was giddy in the stands at Lincoln Financial Field. After a particularly pretty Wentz TD pass to Burton, a fan summed it up: “is this really happening? Is (Wentz) really our quarterback?”

It has been like that. The game was a microcosm for what has been a surreal season for a fanbase conditioned too much more difficult times.

Coach Doug Pederson performed as well as his players, going for it successfully twice on fourth down and generally calling a masterful game.

So go ahead, Eagles fans. Dream the dream but enjoy the moment.  Your team is 8-1. An 8-1 record does not happen by accident. 8-1 can’t be a fluke. 8-1 is more than just a good start to the season.  It is total domination for more than half a season.

Yes, there is still much football to be played. But for right now, your Eagles are the elite of the NFL.