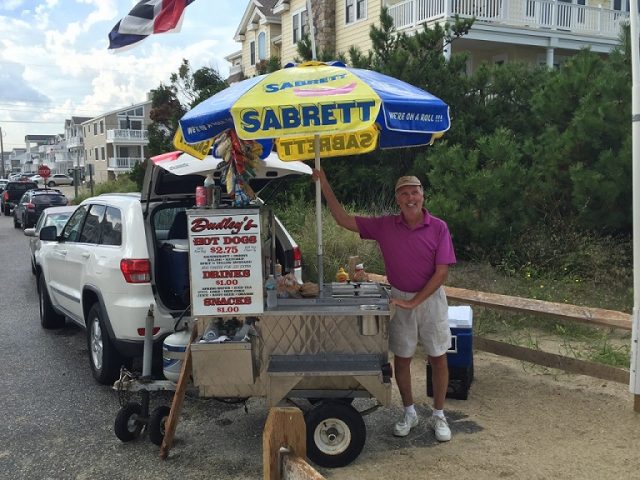 People who frequent the Sea Isle City beach at 75th St. will tell you there’s nothing like a “Dudley Dog.”

That’s because customers get more than just a hot dog when they plunk down their $2.75 at Dudley McGinty’s cart, located at the access path where the street meets the beach. They also get their choice of condiments and some great conversation.

“People are really nice to me and I try to be nice to them,” said McGinty, who has been selling frankfurters in town for more than 15 years.

“I just run a hot dog cart, but people think you know things,” he said. “Like what the weather is going to be, the ocean water temperature, stuff like that.  I chat with them.  It’s fun for me and I hope it’s fun for them. People are on vacation and they are having fun.  They have money to spend and they want a hot dog.  You want them to have a good experience.”

A native of Pittsburgh, Pa., Dudley, 69, has been coming to Sea Isle “all my life.” He was in the parking lot business with his father, and the Viet Nam era vet did a hitch in the Army from 1966 through ’68.  When his parents passed away and he went through a divorce, Dudley made the decision to relocate permanently to Sea Isle.

“I always liked it here and it seemed like it would be a good move. Turns out it was a great decision.”

A member of the city’s Environmental Commission, he also gives back by donating his time and use cart for events such as the beach cleanups twice annually, political rallies, Boy Scout functions, a Red Cross fundraiser and more.

“People tell me my dogs taste the best. It’s like having a hot dog at the ballpark.  It just tastes better when you’re eating your hotdog at the beach.”

He says there is no secret formula. “I tell people where I get my hot dogs and how I make them, and they try to duplicate it at home and they tell me it just doesn’t taste the same.  Part of it might be they are making one or two dogs and I’m making 50 at the same time.  That probably gives mine a little more flavor.”

Customers can choose spicy or yellow mustard, ketchup, onions, cheese or sour kraut to go on their dog, or any combination. Dudley also offers chips and pretzels, sodas and water and cookies.

People keep coming back. “I get to know people.  I have served kids who have grown up and are feeding my hot dogs to their own kids.

“Everybody has a good experience and they are very good to me.”