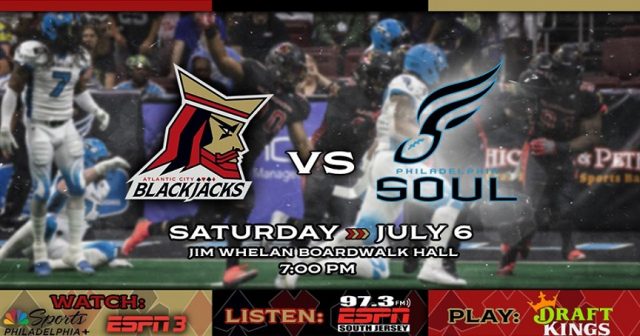 The Atlantic City Blackjacks (4-6) are still alive and fighting for a playoff spot heading into Week 11
against the Philadelphia Soul (6-4). The Soul have won the first two meetings of the season against the
Blackjacks but this one is the most important yet. Atlantic City must win its last two games in order to
make it to the playoffs. Fans can watch live on NBCSP+, ESPN 3, or the ESPN app, or listen to the call live on 97.3 ESPN on Saturday, July 6 at 7:00 pm.
“Facing the Soul for the third time this season is a big challenge,” said Ron James, Head Coach of the
Atlantic City Blackjacks. “They are playing very well at this point of the season and we are going to need  a total team effort to win this weekend.”
Over the past two weeks, Warren Smith and his offense have put up a combined 131 points against the
Empire and Valor. The Blackjacks will need to continue to produce at this level to give them a good shot  at keeping their playoff dreams alive. Smith has been unstoppable in the two games he’s started this year. Throwing for 538 yards with 12 passing touchdowns, three rushing touchdowns and one
interception. Philadelphia has one of the best secondaries in the League and this will be the first
matchup to watch for.
The Soul average 41.3 points against this season while the Blackjacks score an average of 44.5. The
Soul’s James Romain leads the League with seven interceptions and Dwayne Hollis is close behind with four. With the offensive display we have seen recently, scoring over 40 points should not be an issue for Atlantic City. The Blackjacks will finally be returning home after a four-game road trip and Jim Whelan Boardwalk Hall will be loud. Expect Antwane Grant to have another big game. In the two games with Smith starting at quarterback, Grant has 19 receptions, 284 receiving yards and eight receiving touchdowns. Smith has shown his ability to run the ball as well, he has four rushing touchdowns over the last three games. The opposing defense has to respect his arm and his legs while playing against him. With his running ability, teams have to worry about a handoff to Wes Mauia or LaMark Brown along with his deceptive quarterback sneaks. While at the same time watch out for his quick passes and deep balls. The style of offense is one the Soul have not seen in the first two meetings this season.
The Soul are coming off a win against the top team in the League, the Albany Empire. Philadelphia
clinched a playoff spot with that win and will look to make it very difficult for the Blackjacks to get the
last playoff spot. The Blackjacks should know what to expect when the Soul are on offense after playing them twice already. They need to find a way to stop Adrian Ferns from getting into the end zone. He has six rushing touchdowns in the two games against Atlantic City, but only 16 yards. They have all come from inside the five-yard line which means the defensive line needs to push back in these situations.
The second game these two met was probably the worst showing for the Blackjacks this season. Randy Hippeard went down and left the game with an injury which forced a cold Warren Smith to come in and the Soul’s defense shut Smith and his offense out in the first and third quarter. The Blackjacks’ defense finally looked back to its old self in Week 10 after allowing 41 points to be scored. Arvell Nelson felt the pressure all night and was sacked once by Monte Lewis who also forced a fumble on the play. Lynden Trail and Antron Dillon also got some hits on Nelson just as he got rid of the ball. Marvin Ross had two interceptions while Keiron Jones and LaRoche Jackson had an interception each. The defense came away with five turnovers in the win and after seeing zero in the previous three games, it’s a good sign coming into Week 11.
The final matchup to watch for will be if Dan Raudabaugh can be contained by the defensive line.
Raudabaugh has not put up crazy numbers in his first two meetings so it will be important to limit his
opportunities. Raudabaugh sits third in the League for passing yards with 2,307 and second with 48
passing touchdowns. His main receivers are Darius Prince and Lonnie Outlaw. Prince has 799 receiving yards and 18 touchdowns and Outlaw has 506 receiving yards with 10 touchdowns.
The main guys looking to prevent this trio will be the defensive line and Arthur Hobbs and Kiante
Northington in the secondary with Marvin Ross backing them up. Hobbs and Northington rank second
and third in the League for tackles with 51 and 50.5. Ross also now has three interceptions which leads
the team and he also picked off Raudabaugh in Week 1. Monte Lewis leads the team in sacks with four
and Antron Dillon has a forced and recovered fumble. The defense will need to create turnovers like
they did in Week 10 to get the offense back on the field to put points up on the board. 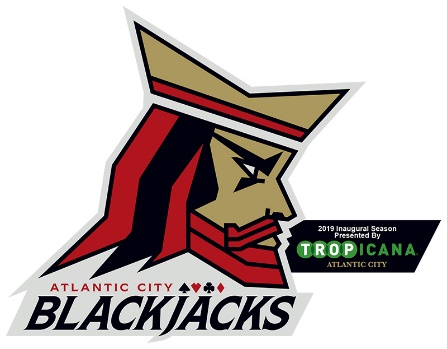 Fans can secure their season tickets for the Atlantic City Blackjacks now with a $50 deposit per seat ($75 for VIP seats) by calling 609-783-9494 or by going to ACBlackjacks.com. A team representative will contact those that have submitted a deposit within a week to select your specific seats, which will be done in order in which deposits were received.

About the Arena Football League
The Arena Football League enters its 32nd season in 2019. Since its inception in 1987, the AFL showcases a fastpaced, exciting game to millions of fans in a myriad of markets. With the addition of two new teams in Atlantic City, N.J., and Columbus, O.H., the League totals six teams for 2019: Albany, Atlantic City, Baltimore, Columbus, Philadelphia, and Washington D.C. Each team will play 12 regular-season games in 2019. One can find the League on Instagram, Twitter and Facebook using the handle @OfficialAFL.

About Eldorado Resorts, Inc.
Eldorado Resorts is a leading casino entertainment company that owns and operates twenty-eight properties in thirteen states, including Colorado, Florida, Illinois, Indiana, Iowa, Louisiana, Mississippi, Missouri, Nevada, New Jersey, Ohio, Pennsylvania and West Virginia. In aggregate, Eldorado’s properties feature approximately 27,500 slot machines and VLTs and 800 table games, and over 12,500 hotel rooms. Founded in 1973 in Reno, Eldorado has been dedicated to providing exceptional guest service, a dynamic gaming product, award-winning dining, exciting entertainment and premiere accommodations. Our extensive management experience and unwavering commitment to our team members, guests and shareholders have been the primary drivers of our strategic goals and success. We take pride in our reinvestment in our properties and the communities we support along with emphasizing our family-style approach in an effort to build loyalty among our team members and guests. We will continue to focus on the future growth and diversification of our company while maintaining our core values and striving for operational excellence. For more information, please visit www.eldoradoresorts.com.