Erik Wade promises that the next time he visits Sea Isle City, it will be in a car.

On Dec. 2, 2018, he made an unconventional arrival in the shore town by washing up on the 61st Street beach in his 36-foot sailboat.

His anchor line snapped while he was asleep overnight and the winds and tide pushed him ashore.

At the time, he was attempting to sail solo on a 1,400-mile trip from Boston to Key West, Fla., for a winter sojourn. His journey came to an abrupt halt when he became stranded in Sea Isle – where he would remain for four days before he was plucked off the sand by a marine towing company.

“The next time I visit Sea Isle, I intend to do it in a car and not end up on the beach,” Wade said with a laugh during an interview Monday on the first anniversary of his grounding.

His high-and-dry sailboat attracted the attention of hundreds of curious beachgoers. Throughout his unintended stay in Sea Isle, Wade benefited from the hospitality of local residents who gave him food and a place to stay. To help Wade pay his expenses, one good Samaritan set up a GoFundMe page that raised $1,670 toward a goal of $5,000.

“I would be in somber spirits if not for everybody there in Sea Isle,” Wade said. “I am so grateful. It gives me more faith in everything. I’ve become a better person and a better sailor because of it.”

Wade also said he is forever indebted to Capt. John Ryan, the owner of TowBoat U.S., the marine towing company that pulled the sailboat off the beach and back out to sea. Ryan charged Wade just $1,500 to tow him from Sea Isle when the normal cost would have been closer to $15,000.

Ironically, Ryan had also rescued Wade in late November when rough water obscured Wade’s ability to see the channel markers and he ran aground near the Ocean City-Longport Bridge. Not long after that incident, Ryan was saving Wade again in Sea Isle.

“I’m hoping he can go far enough south so he’s not in my area and I don’t have to worry about him anymore,” Ryan joked of Wade in an interview last year.

Wade said he is eternally grateful for all that Ryan did for him. Without Ryan, Wade is convinced that he would have lost his beloved sailboat, the “Pyrate,” the old-fashioned spelling of pirate.

“Capt. John Ryan, I’ll never forget that man,” Wade said. “He didn’t have to step forward and do what he did. It reminds me that when you lose your home, people still care.”

As a token of his appreciation, Wade said he wants to buy Ryan some New Jersey Devils tickets.

An experienced sailor, the 41-year-old Wade relies on paper charts, a compass and a monocular when he is out on the water instead of using satellite-based navigation.

“I like to keep it simple, sweetheart. Stick with the basics,” he said.

His old-school style of navigation is not without risks, though, as evidenced by his two groundings last year at the Jersey Shore.

The steel-hulled sailboat serves as the full-time home for Wade’s nomadic lifestyle. A union bridge painter, Wade intended to spend a few months relaxing in the semi-tropical Florida Keys after work dried up in Boston over the winter of 2018.

After he was pulled off the Sea Isle beach, Wade took shelter at the Seaview Harbor Marina near Longport for two weeks to repair his battered boat. He had a broken tiller arm that temporarily left him without steering. He also had to fix a shattered instrument cluster that prevented him from restarting his engine.

When he left the Seaview Harbor Marina, Wade still had thoughts of sailing all the way to Key West. However, he cut his trip short to seek safe haven for the winter at the Gregg Neck Boat Yard in Galena, Maryland, in the upper Chesapeake Bay.

He continues to live in Galena and now works as a bridge painter in Philadelphia. He is in the process of refurbishing his boat at the Gregg Neck Boat Yard and is eager to get it back on the water next year. He still dreams of making it to Key West.

“Hey, it turned out all right,” Wade said of his incredible odyssey in December 2018. “Pyrate and I survived. She’ll be as good as new. I’ll be able to go to Key West in style.”

If he should pass by Sea Isle again, he said he intends to stay offshore. 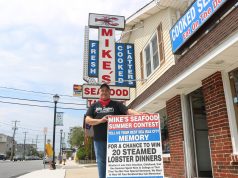 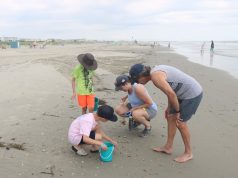 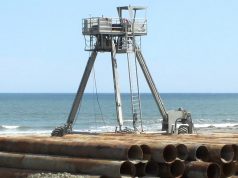