City Council members, at their meeting Tuesday, said police will be cracking down on disorderly conduct throughout the summer season as part of a stepped-up effort to protect the beaches, Promenade and central part of town, all popular gathering spots.

Business Administrator George Savastano told Council that Sea Isle police have increased their patrols and enlisted the help of the Cape May County Sheriff’s Department K-9 Unit to prevent crime.

“I think it discourages those who want to do what they ought not do,” Savastano said.

Savastano explained that residents and tourists have encountered crowds of teenagers and young adults that were “somewhat intimidating.”

The police crackdown, he stressed, will protect Sea Isle’s reputation as “a safe place, a family place and a place we want you to come to.”

Council President William Kehner publicly commended the police for their campaign to “take back” the beaches, Promenade and central business district.

Kehner said police will take a “hard nose and no nonsense” approach toward troublemakers through the rest of the summer.

He said he was particularly concerned about reports that senior citizens feared for their safety when they were confronted by groups of disrespectful teens or young adults.

In an interview after the Council meeting, Police Chief Tom D’Intino pledged there will be “zero tolerance” for disorderly conduct.

Police have already increased their presence by combining regular patrols with the seasonal officers who work during the summer, D’Intino said.

He also said the Police Department has set up a trailer at 40th Street and the Promenade that serves as a processing center for arrests. Juvenile offenders are held there until their parents pick them up after they’ve been arrested or given summonses.

“So far, we’re getting good cooperation from mom and dad,” D’Intino said of police efforts to work with parents to curtail rowdy behavior by their children.

Since Memorial Day weekend, police have received numerous complaints about unruly teens, underage drinking, open containers of alcohol and curfew violations on the beaches, officials said. Another problem has been bicycle riders, skateboarders and roller-bladers violating the posted times on the Promenade.

An armed robbery over the Fourth of July weekend “was the straw that broke the camel’s back,” D’Intino said.

During the Fourth of July weekend, police issued 27 summonses for quality-of-life offenses, including curfew violations on the beaches and Promenade, the city said in a press release. In addition, there were arrests for drug possession, underage drinking and robbery and weapons offenses.

Police are urging residents and tourists to report any violations by calling the department at (609) 263-4311, extension 0.

“Fighting crime isn’t a job the Sea Isle City police can do alone,” the department said in a statement. “It takes all of us working together to make Sea Isle City a safe and enjoyable family oriented community.”

In other business Tuesday, Council approved a nearly $415,000 contract for reconstruction of a flood-prone area of Kneass Street. The project will include drainage and sewer upgrades on Kneass between 38th and 40th streets and reconstruction of an outfall pipe at 38th Street leading to the bay, Savastano said.

The construction contract was awarded to Garden State General Construction Inc. of Clermont, N.J., the low bidder. Work is expected to begin in September and take three months to compete.

Savastano explained that the project will help alleviate persistent flooding in a low-lying area of Kneass Street and will also replace some aging and deteriorated infrastructure. 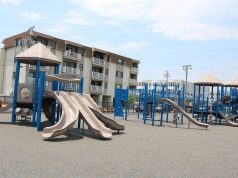