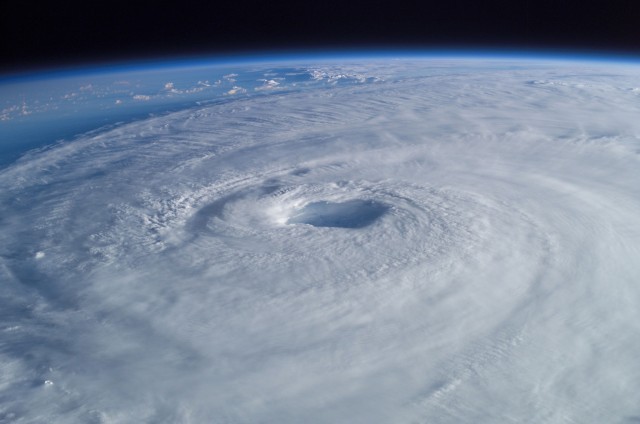 This record breaking 2015-16 El Nino season was bitter sweet for Sea Isle. It gave us a mild winter but hit us hard with strong coastal storms. Now that El Nino is a thing of the past, it’s time to look ahead to what’s next.

2015-16 El Nino season was one of the strongest on record and resulted in extreme conditions for Sea Isle. A rather mild winter with temperatures reaching the 60s and even 70s each month followed by brief bouts of cold air. Along with an active Jetstream and warmer than normal ocean temperatures, it also resulted in a couple strong Nor’easters.

Since then, the rapid decline of El Nino over the last several months has been impressive. The warmer waters in the equatorial Pacific that coincide with El Nino cooled rapidly and now is on pace to reach La Nina status by Autumn. The Climate Prediction Center currently gives a greater than 70% chance of La Nina developing by fall. 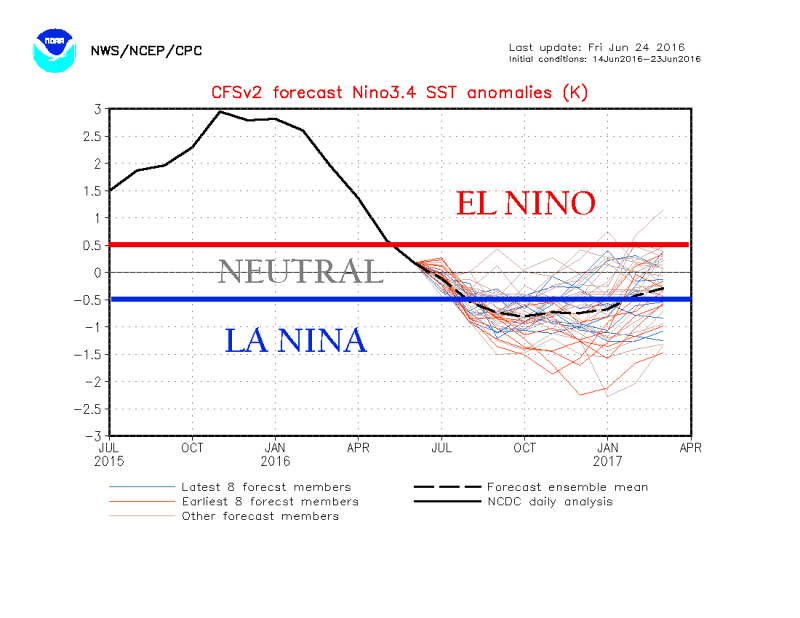 La Nina is a result of cooler than normal temperatures along the Pacific equator which can affect the weather on a Global scale. So you might ask, how will this affect Sea Isle City during this year’s Hurricane season?

During last year’s hurricane season, El Nino pretty much stifled every storm that tried to form in the Atlantic Ocean while the Pacific Ocean had an intense season with a record number of hurricanes that reached major hurricane status. A couple storms were able to overcome the wind shear, most notably Joaquin (in early October 2015) which caused extensive damage in the Bahamas and indirectly caused record flooding in South Carolina.

So far this season, we’ve reached 4 named storms. This is faster than any other hurricane season on record, but it doesn’t necessarily mean the rest of the season will be active. With the exception of Hurricane Alex which formed in January in the far Eastern Atlantic Ocean, the other three named storms this year have been insignificant in regards to strength and longevity.  Hurricane season during La Nina years tends to be more active due to less wind shear in the tropics. While less wind shear will help aide in development of more tropical named storms, other factors like the strength of the Atlantic High Pressure and sea surface temperatures are critical in tropical development. Currently, parts of the North and Far Eastern Atlantic Ocean are still rather cold which could prevent development over those areas at least through the summer. Of course, that could change during the peak of the Hurricane Season which runs late August through September. 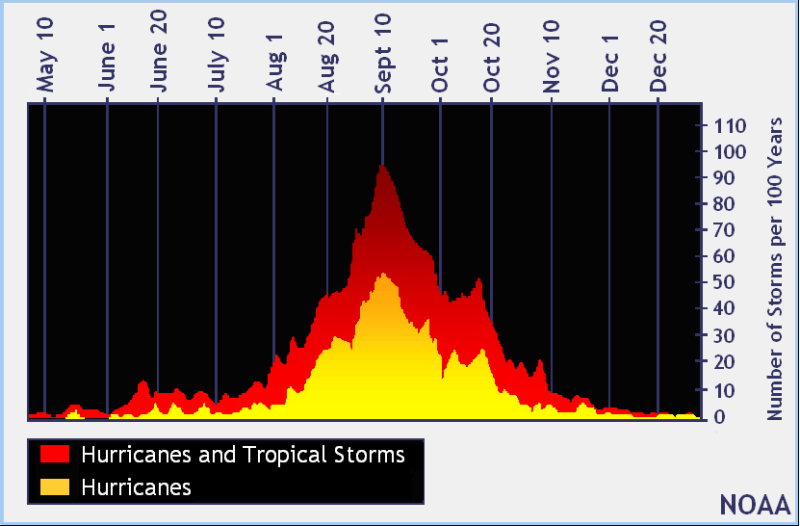 Graph shows the total amount of named storms over the last 100 years with the highest amount peaking during the 2nd week of September. NOAA

Unless the rest of the Atlantic warms up, the majority of tropical development could occur in the Gulf of Mexico and off the Southeastern U.S. coast which both could have an impact on our area. The U.S. coastline has not been hit with a Major Hurricane in over 10 years (Hurricane Wilma-2005). This does not mean there was a lack of major hurricanes in the Atlantic. Steering currents in the upper atmosphere guided these storms stay away from the U.S. When a trough sets up over the Eastern U.S. approaching hurricanes are picked up and pushed out to sea. However, there are times when a blocking pattern sets up and can capture a storm and pull it towards the coast, like Superstorm Sandy. Overall, the chances of a major hurricane can increase during La Nina years. Ocean temperatures and our geographical location make it difficult for major hurricanes to affect Sea Isle. Hurricanes need to 80+ degree water to maintain its strength. Also, wind shear is much stronger at our latitude which weakens hurricanes. But it is important to know, the strength of a hurricane which is determined by its maximum wind speed isn’t as important as its impacts. Storm surge and tidal flooding has been the major impacts of any hurricane or coastal storm that has affected Sea Isle.

In conclusion, we can expect at least an average season to potential above average hurricane season. The average would be 12 named storms (39-73mph), 6 hurricanes (74mph+) and 3 major hurricanes (111mph+). Remember, whether it’s an active or inactive season, it only takes one storm. So be prepared!