In an era of the big, modern Super Wawa convenience stores, the tiny Wawa in Sea Isle City is an anachronism.

This throwback to the 1980s – it was built 33 years ago, city records show – occupies the corner of 38th Street and Landis Avenue in the heart of downtown.

Well, get ready to say goodbye to the 1980s. The store is going to be expanded and get a facelift for a more contemporary look.

Wawa Inc. is expected to appear before the Sea Isle Planning Board on Nov. 12 to seek approval for a nearly 1,500 square foot expansion that will increase the store’s total size to nearly 4,500 square feet.

The outdated, nondescript exterior will be ditched in favor of a more modern design highlighted by a big Wawa sign perched over the front entrance overlooking Landis Avenue, an architectural rendering shows.

“Their intention is to update it a lot. They’ll make it more attractive,” said Genell Ferrilli, the planning board secretary.

Wawa submitted a planning board application on Oct. 2 that seeks site plan approval for the project as well as a series of zoning variances.

In the application, Wawa’s attorney, Stephen Nehmad, wrote that the company will present testimony during the November planning board meeting to show that the benefits of the proposed variances “will substantially outweigh any detriments.”

Nehmad could not be reached for comment Thursday. The planning board application indicates that Wawa will seek variances for front yard setback, back yard setback, minimum building coverage and minimum lot frontage.

The Wawa store sits on property that totals just 11,000 square feet, according to the planning board application. In comparison, an acre of land is 43,560 square feet.

Wawa plans to add the expansion to the side of the store closest to 38th Street.

Members of the planning board briefly discussed Wawa’s project during their meeting Tuesday night. They stressed that they intend to scrutinize the proposed expansion before taking a vote.

“We’re going to take our time to make sure it’s correct,” said Patricia Urbaczewski, board chairwoman.

Jon Batastini, the planning board solicitor, told the board members that a Wawa representative contacted him in hopes that the board could “expedite” the approvals for the project.

“They mentioned they would like to get this approval sooner than later,” Batastini said.

Wawa had asked whether it was possible for the board to have a written resolution ready at the November board meeting to immediately formalize the vote on the expansion project, Batastini explained.

Normally, the board votes on a project one month and then follows up the next month by adopting a resolution that formalizes its vote and spells out the details of a project.

One planning board member, Antimo Ferrilli, said the board does not plan to change its protocol for the Wawa project. He indicated that the resolution would come in December, assuming that the board votes on the project in November.

“I agree. I don’t think there’s any need to rush,” Jack McCusker, another planning board member, said of the Wawa project.

Ferrilli said the planning board began speaking to Wawa about the project at least a year ago when the company was first “pushing to get it done.” Then the board didn’t hear anything from Wawa for a while, he said.

Road Projects to Get Underway in Fall 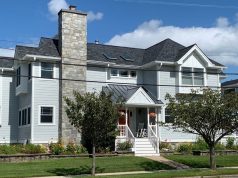 Road Projects to Get Underway in Fall