Steve Ahern, who, along with his wife, Susan, runs the Sea Isle Terrapin Rescue organization, is gearing up for turtle nesting season.

Nesting season for the diamondback terrapin will begin around the last week in May and last until around the third week in July.

“They are looking for a place above the high tide line to lay their eggs,” Steve Ahern explained Wednesday. “They lay eight to 12 eggs and can come out up to three times in a nesting season.”

Ahern cautioned that drivers should be aware of the females crossing the road. “If they want to and are safely able to, they can pick up the turtle and move it across the road in the direction it is going,” Ahern said. “That goes the same for pedestrians if they want to help and it is safe.”

The Aherns are hoping a new mesh fencing installed on Sea Isle Boulevard will prove effective in saving many of the terrapins that try to venture across the highly trafficked roadway to make their trek to lay eggs.

“There will still be an opening near Larsen’s Marina, which will allow them access to the roadway, so drivers should be cautious,” Ahern explained.

The fencing replaces plastic tubing which had gaps in places, enabling turtles to crawl through it and onto the boulevard.

Still, there are other areas through the community where turtles are in danger of being run over, especially in the busy summer season.

The Aherns, along with a dedicated group of volunteers, have made it their mission to rescue diamondback terrapins from the streets of Sea Isle, digging up eggs in sometimes unusual places including Dealy Field. They turn them over to the Wetlands Institute in Stone Harbor in hopes they will hatch.

Diamondback terrapins can live for 30 to 40 years, but with roadwork, construction, shore traffic, and deaths related to the fishing industry, longevity is always a concern. The terrapins are not been listed as threatened or endangered in New Jersey, but they are listed as decreasing.

Only one egg in a thousand grows up to be an adult turtle, Ahern said.

The Terrapin Rescue found success in protecting thousands of terrapin eggs in nesting boxes, one constructed behind the Sea Isle library near the marsh and the other on Central Avenue.

Nesting boxes give turtles an alternative place to lay their eggs. They are not in harms way near roads and there is a gate designed to keep out predators.

The boxes, constructed by the volunteers, are both 12 feet by 28 feet.

The work to construct and install is labor intensive. On April 27 the Aherns and the volunteers plan to meet and get to work on putting them back up and ready for the female terrapins.

“We had a very active nesting season last year which was a positive sign,” Ahern explained. “However, the more active a season the higher the mortality rate. We’re hoping for the same type of activity.”

“We can place a nest enclosure to keep out predators. We have a limited number and they only work out in limited situations, which we will discuss when we get a call,” Steve Ahern said.

Ahern urged anyone who sees a turtle nesting to mark or cover the exact spot and contact them.

For more information call the Aherns Sea Isle Terrapin Rescue organization at (609) 263-7358 and also check out the Facebook page. 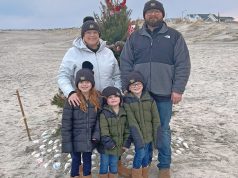