They congregated at first in a movie house. They persevered through a world war to eventually build a church.

They were the instrument for establishing a chapel in Townsends Inlet. And when they ultimately moved to their new home on the mainland after nearly a century, the Lutheran congregation left a legacy of persistence and dedication in Sea Isle City well worth applauding.

From the beginning there had been a Lutheran presence in Sea Isle. It was inevitable that this would someday translate into the need for a place for the congregation to worship.

It wasn’t going to be easy. The first reported Lutheran service took place on June 20, 1915, in the Stevens Moving Picture Theater in Excursion House on the boardwalk.

Mr. Stevens donated the use of his facility on every Sunday afternoon until September, when the Lutherans were invited to move to the warmer Moose Hall on 44th Street because the cold weather was coming.

Toward the end of that same year, the congregation was officially incorporated as the “Messiah Evangelical Lutheran Church,” and the Reverend John T. Gillison was appointed first pastor at a salary of $10 per week.

But they still needed a church.

Then, through three separate negotiations, the church was able to acquire several lots encompassing the area around Landis Avenue and 42nd Street, where they built a temporary chapel facing 42nd Street with their own hands and with the help of the community.

In November of 1916, a formal building fund was set up, plans were drawn for a new church, the land was cleared by the pastor himself, lumber and bricks were purchased, and it seems they were ready for the next step – but World War I got in the way. And all thought of construction was temporarily halted.

But finally, after more than a decade, the Lutheran congregation was ready to settle into its new facility.

Of the many upgrades and renovations over the years, the most transformative occurred in the late 1960s.

It was then that the church was completely remodeled under the direction of Pastor Frank Adler.

The parsonage, which was not being used, was joined to the church building.

The result was the Messiah Lutheran Church as the people of Sea Isle remember it. It has been gone now for more than a decade, but not really. It’s now the home of the RE/MAX real estate company with very little external change.

Reasons for an eventual move from Sea Isle were many. Older parishioners were dying.

Those still living in town were selling their homes at a hefty profit and moving to the mainland. Potential new parishioners couldn’t afford the cost of a home in Sea Isle – and then there was the parking. Plus, the mainland offered new opportunities for growth and community involvement.

The upshot was that the Sea Isle property was sold, and the proceeds used to help fund the construction of a modern church building on Route 9 in Ocean View. The congregation moved into its new off-island home in 2010 and still worships there. 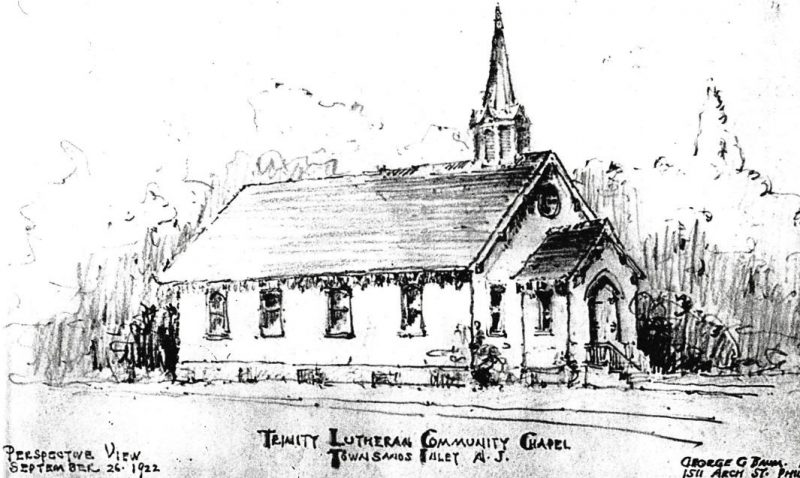 This little chapel has occupied the same spot at the corner of 85th Street and Landis Avenue in Townsends Inlet since its founding in the 1920s.

It’s been added to and spiffed up, but it still looks pretty much the same today as it did then. And it continues to serve the needs of residents and visitors as the only formal place of worship in the inlet. Back to the beginning.

In the early part of the 20th century, there was a trolley line which ran the length of Landis Avenue.

It provided ready access for the people of Townsends Inlet to the churches in downtown Sea Isle. But in 1917 the trolley ran out of funds and shut down forever – leaving many in Townsends Inlet effectively churchless.

It was this trolley loss, coupled with the growing number of summer visitors to T.I., that provided the impetus for building a local place of worship. (Much of what follows is based on the minutes of church meetings held from 1919 through 1960.)

It was there that the Reverend Gillison suggested that those present form a Ladies’ Aid Society to collect funds to build a church in Townsends Inlet. The idea was taken up with great enthusiasm.

Two days later, the Ladies’ Aid Society met formally for the first time, and on July 30 they held their first event – a cake sale – which brought in $25. They were on their way.

A suitable lot became available in 1920 for $500 from Charles Landis, but the church had as yet no organization willing to take on the responsibility.

It was a year later that an agreement was reached, and the land was purchased under the name of the United Lutheran Church “for the Lutheran Community Church to be organized in Townsend’s Inlet, New Jersey.”

For this momentous occasion, the Ladies’ Aid Society held their meeting in Landis’s real estate office. The new church was to be named “Trinity Lutheran Community Chapel,” with the Lutheran Church holding it in trust for use by the community.

Ground was broken for the church in November, 1922. The cornerstone was laid the next spring and the formal Dedication was held on July 15, 1923.

Over the next few decades the appearance of the building changed, especially with the addition of a wall around three sides in 1926 and a rear extension in 1938 to accommodate the growing Sunday School.

The name has since been simplified to “Trinity Community Church,” but the structure remains much the same as it was nearly a century ago. And it still welcomes all visitors.

This “Spotlight on History” was written by Sea Isle City Historical Society Volunteer Bob Thibault, who expressed his thanks to Pastor Jeff Rickards of Messiah Lutheran Church for taking time to read over a draft of this article.

To enjoy a collection of photos, literature and artifacts, please visit the Sea Isle City Historical Museum at 48th Street and Central Avenue. Access the website at www.seaislemuseum.com or call 609-263-2992. Current hours are 10 a.m. to 3 p.m. on Monday, Tuesday and Thursday, and 1 p.m. to 3 p.m. on Friday. Admission is free.