Sea Isle City’s new fire truck has everything but a Dalmatian.

Costing about $632,000, the gleaming red truck is comparable to virtually anything found in the fire departments of major cities. It vaults the beach town’s volunteer fire department into the big leagues of firefighting.

“It’s about equal to all fire trucks,” said Frank Edwardi Sr., Sea Isle’s fire chief. “This has all the bells and whistles that you’re going to need.”

It is essentially a piece of high-tech equipment on wheels. It features an array of safety innovations that will allow the fire department to respond to any type of emergency that may occur – from severe coastal flooding to a major inferno, Edwardi explained.

Despite its girth, the truck drives like a family sedan. Edwardi took the big rig out for a spin on Thursday, easily navigating through Sea Isle’s narrow streets with the aid of power steering.

“It’s like driving your car. It’s pretty easy to drive compared to a lot of trucks,” said Edwardi, 74, who has handled a lot of fire equipment during his 47 years with the department.

Manufactured by Spartan Motors, the new truck arrived on Memorial Day weekend and immediately took its place at the head of the fire department’s fleet of emergency vehicles. It replaced an old fire truck that Sea Isle had for 22 years.

“You would compare this like a Rolls-Royce to a Chevy,” Edwardi said.

Although the shiny truck has plenty of curb appeal, the city did not buy it for its beauty. Edwardi stressed that it will be a centerpiece of the public safety program that protects the residents and tourists in the popular summer seashore destination. Sea Isle also helps to fight fires in neighboring Strathmere and occasionally in other surrounding communities.

Although the fire department is made up of volunteers, it receives funding from the city. It was the city that bought the new fire truck.

“You’ve got to give the city a pat on the back. The Council and the mayor, they’ve never refused us anything,” said Edwardi, whose son, Frank Edwardi Jr., is a member of Sea Isle’s City Council.

Sea Isle’s year-round population is only about 2,000 residents, but the town swells to between 50,000 to 70,000 vacationers during the height of the summer beach season. The big summer crowds can put a strain on emergency management and public safety.

With the fire new truck, Sea Isle’s 34-member fire department will be much better equipped to handle emergencies, Edwardi said.

The truck has a special “boom” arm that extends 28 feet high and allows firefighters to spray up to 1,000 gallons of water per minute. The boom arm is equipped with high-intensity LED lighting to give firefighters much better visibility when battling a blaze.

“When you’re fighting a fire at night, it will be like daytime with those lights on,” Edwardi said.

The boom arm will be particularly helpful for dousing fires that break out on the second floor of the duplexes that are common in town, Edwardi explained.

In November, Sea Isle lost two beachfront duplexes and one single-family home on Pleasure Avenue between 91st and 92nd streets when fire jumped from one adjacent residence to the next.

Sea Isle Fire Lt. Dan Devlin said the boom arm will help to protect the neighboring houses better when a fire of that type occurs.

Devlin and Edwardi said the new fire truck can also pump 1,500 gallons of water per minute through its hoses. It also has a supply of soaking foam to extinguish fires caused by gas or petroleum.

The fire truck will also do double duty to help protect the low-lying barrier island from flood waters unleashed by coastal storms. Sea Isle was pummeled by flooding from Hurricane Sandy in 2012 and the powerful nor’easter Jonas in 2016.

Flooding from Jonas damaged the electronics on one of the fire department’s ladder trucks, essentially rendering it a loss, Devlin said.

The new fire truck, however, has four-wheel drive and nearly three feet of clearance to allow it to roll through even deep flood waters. It will help to rescue people trapped in flooded areas, Edwardi said.

Sea Isle is in the midst of a major flooding study to devise a long-range plan to protect the island from storm water, including the construction of drainage projects, dikes and pumping stations.

Edwardi said it appears the storms are growing more severe over time, underscoring the need for the new fire truck.

“It’s getting harder and harder with these storms,” he said. 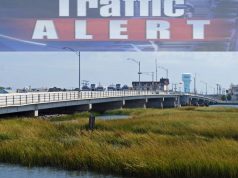