Jo-Anne Mattos and her daughter, Kate-Lynn Rice, vacationers from Philadelphia, marveled at the white-capped waves rolling in Saturday on Sea Isle City’s beaches as brisk winds whipped stinging sand into their faces.

“I think it’s amazing,” Mattos exclaimed. “It’s the wildness of it all.”

Mattos and Rice insisted they were going to stay in town the entire Labor Day weekend, even though an exodus of cars leaving Sea Isle made it obvious that many people were clearing out before Sunday’s expected arrival of Tropical Storm Hermine.

“They’re idiots,” Rice said with a laugh, poking fun at the people who were hitting the road and cutting their holiday weekend short.

Saturday was, indeed, decision day. Stay or go. Hit the road or hunker down.

Tom Kelly, a summer resident of Sea Isle from Norristown, Pa., was among those staying. He said he was looking forward to seeing his first major storm at the Jersey Shore.

“I’ve never experienced a big storm before. I want to see what happens,” he said.

Kelly spoke as he sipped on a Miller Lite and smoked a cigarette while sitting at the outdoor bar at the LaCosta Lounge on Landis Avenue. He was joined by his brother and sister-in-law, Brian and Pam Kelly, also of Norristown.

“I live in a second-floor condo, so I don’t see any issue with flooding,” Tom Kelly said. “Maybe we’ll lose electricity, but I have a flashlight.”

On a normal Labor Day weekend, the last hurrah of the summer season, Sea Isle’s bars, restaurants and other businesses would be packed. The threat of a tropical storm pummeling the Jersey Shore, though, left many of the prime downtown parking spaces empty and stretches of the beachfront eerily quiet.

Boats at the Sea Isle City Marina off John F. Kennedy Boulevard remained snugly tied in their slips. No doubt their owners were disappointed that they might not be taking any fishing trips this weekend.

Ron Fenning, the marina’s assistant manager, expressed surprise that more owners didn’t pull their boats out of the water Saturday ahead of the storm. He cautioned them about waiting until the last minute to do that.

“I think today is the last chance,” Fenning said early Saturday afternoon. “Tomorrow could be a nightmare and the winds are going to be killing us.”

Nightclub and bar owners, including Mayor Leonard Desiderio, said they would stay open through the weekend, if possible, to entertain the remaining crowds.

“We’re going to do the best we can, as long as we can, for our customers,” said Ralph Pasceri, co-owner of the Ocean Drive nightclub on Landis Avenue.

Shenanigans and the Dead Dog Saloon, two other anchors in the downtown bar scene along Landis Avenue, also had no plans to close down, said Scott Grossman, who manages both places.

“We’re not going to close unless we have to,” Grossman said. “We’ll be open unless water comes into the bar.”

By Saturday afternoon, the Dead Dog’s downstairs bar was teeming with customers. Grossman said Dead Dog was planning to open up the second floor to accommodate the overflow of crowds.

“People are celebrating the hurricane,” Grossman said of the customers who were riding out the storm. “I was talking to a few people and they said they definitely weren’t leaving. They paid for their rentals and were going to get their kicks in.”

Desiderio, owner of the Kix McNutley’s nightclub and bar complex at 63rd Street and Landis Avenue, said it would be “business as usual” at his place. He noted he intended to keep Kix McNutley’s open on Sunday, but cancelled a DJ dance party.

“We’re open, we have entertainment and we’re going about our business as we normally do every day,” Desiderio said while manning a cash register at the Kix McNutley’s liquor store.

The city sent out email blasts and used social media to update residents and visitors on the storm as it moved up the East Coast. The city also contacted residents in a reverse 911 call to give them storm information, Desiderio said. 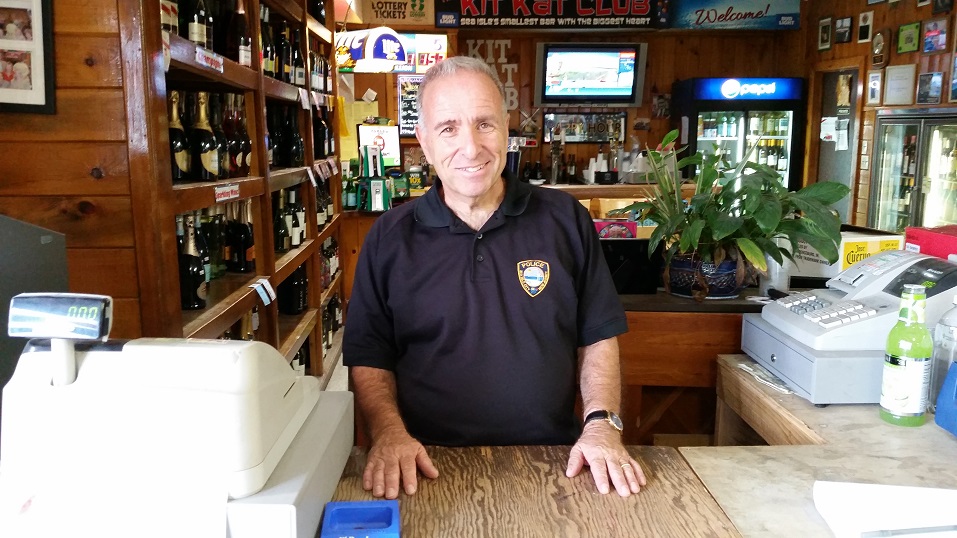 “We’re asking everyone to batten down the hatches and stay safe,” he said.

The mayor urged anyone who experiences an emergency to call 911. For non-emergencies, they should contact the police department at (609) 263-4311, ext. 0.

As of Saturday, Sea Isle did not order mandatory evacuations but urged vacationers to leave the island ahead of the storm’s worst conditions.

The statement also warned that extensive street flooding is expected through the high-tide cycles on Saturday night, Sunday and into Monday.

The Townsends Inlet Bridge, connecting Sea Isle and Avalon, was closed Saturday because of high waves on the Avalon side, Desiderio said.