Parishioners who are trying to save the 136-year-old St. Joseph Catholic Church from demolition are encouraged by a decision from the Vatican to conduct a cost analysis to remove mold contamination inside the building.

They say the old church is a sacred sanctuary that has been a religious and historic landmark in Sea Isle City dating back nearly as long as the shore town’s formal founding in 1882 by visionary real estate developer Charles K. Landis.

“In my opinion, it has been the heart of the community for 136 years. A lot of history was made there,” said Mike McHale, a church member who is part of a group of preservationists known as the “Save Our Historic St. Joseph’s Church” campaign.

Preservationists believe that Sullivan’s “Decree of Relegation” on Feb. 5 is a prelude to the church’s demolition. They have been fighting with the church leadership over the fate of the building and have taken their battle all the way to the Vatican.

McHale said the Vatican was originally expected to rule on the appeal on Oct. 9, but a decision has now been pushed back until Dec. 9. Preservationists want the Vatican to overturn Sullivan’s decision and declare the church a sacred place again, ensuring that it would be saved.

Meanwhile, the Vatican has authorized a cost analysis for removing mold contamination inside the building, McHale said. An engineering study has also been approved to determine the old church’s structural integrity, he noted.

“We take it as a good sign because they are questioning the Diocese,” McHale said of the Vatican.

Removing the mold contamination is not only seen as a critical step in the preservationists’ goal to save and refurbish the building, but also to eventually revive it as a venue for weddings, funerals and baptisms.

The historic church stands side-by-side with the modern $7 million St. Joseph Catholic Church that opened in December 2011. The new church includes a 1,300-seat sanctuary serving as the main worship hall for the congregation.

Church leaders have argued that St. Joseph’s simply can’t afford to maintain and refurbish the old church at the same time they are using the modern church. They have talked about the possibility of demolishing the old church to make room for a new “spiritual life center” for meeting space, special events and new classrooms.

Not wanting to take on substantial debt to finance the old church’s upgrades, the Parish Council and Parish Finance Council both unanimously voted to seek the “Decree of Relegation” from Bishop Sullivan.

Since that time, however, a new pastor, Father Perry Cherubini, has taken charge at St. Joseph’s. McHale said Father Cherubini recently reopened the old church to the leaders of the preservation group so that they could take a look inside for the first time in about a year.

“Father Perry is open and transparent with our group,” McHale said. “He’s been very open with us about the church.”

Father Cherubini could not be reached for comment Friday. In an earlier interview with SeaIsleNews.com, he indicated it would be premature for him to express his opinion about the old church before the Vatican rules on the preservationists’ appeal to overturn the Decree of Relegation.

“So until we get our response from Rome on their request to have it reversed, I wait with them to see what our options will be,” he said then.

Occupying the corner of 44th Street and Landis Avenue, the old church is an example of the Gothic-revival architectural style. It has stained-glass windows about 100 years old, mahogany front doors and soaring exposed arched beams in the sanctuary that resemble the inside of a ship’s hull, church members say.

“The architecture is outstanding. The stained-glass windows can’t be replaced,” said McHale, a former Sea Isle mayor and a trustee with the city’s Historical Society and Museum.

Another notable feature of the old church is a historic bell tucked inside the towering white steeple. The bell, which dates to 1891, is heard at 12 noon every day when it is rung by an electrified system, McHale said.

The bell tower, though, leaks and is one of the areas where water has seeped into the old church, causing the mold contamination. Puddles of water also form between the old church and new church because of an inadequate sump pump, allowing even more moisture to enter the building, McHale explained.

He estimated that about 6 percent to 7 percent of the old church is contaminated with mold, including spores on some of the walls.

In the meantime, preservationists and church officials await the results of the mold inspection and the engineering study that will determine the building’s structural integrity before considering their next move. 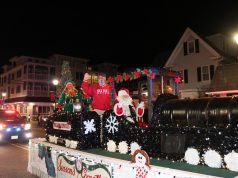 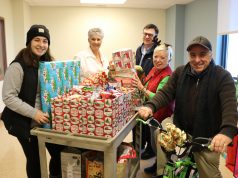 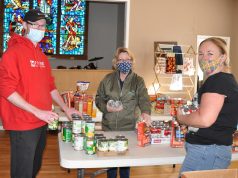