When Sea Isle City Police Chief Tom McQuillen learned that Rich Burrows, a married father of two, was suffering from brain cancer, he immediately asked the officers if they would like to donate funds from “No-Shave November” to the family.

“I presented it to the guys, and they unanimously endorsed the idea. They agreed that was the family we wanted to support this year,” McQuillen said.

Burrows, 38, and his wife, Jamie, of Dennis Township, were high school sweethearts. They have two young children, Dailey and Brody.

“The last thing we want them to worry about is finances,” McQuillen said. “They are struggling with the medical treatment. We wanted to do whatever small part we could to alleviate some of their worries.”

Most of the members of the police department participated in “No-Shave November.” They raised $1,450 to donate to the Burrows family. The check will be presented to the family in the near future, McQuillen said.

This is not the first time Sea Isle police officers have raised funds to help a family. McQuillen said the department has given to other families in the past. He noted the Burrows family was especially important.

“We’ve done this for the last few years. We’ve contributed to different people,” he said. “But when you find someone who is battling cancer, you want to do something for him and his family. You want to give back to a person in need.”

He grew up in Eldora and attended the Dennis Township public schools. He is a 1999 graduate of Middle Township High School. He married Jamie in 2003.

According to information on the Sea Isle Police Department’s Facebook page, Burrows was diagnosed last August with anaplastic oligodendroglioma, an aggressive form of brain cancer.

He had the majority of a golf ball-sized tumor removed from his brain. He is undergoing proton radiation therapy and six, 42-day cycles of chemotherapy.

Instead of staying at the hospital in Philadelphia for therapy, Burrows has chosen to commute from his Dennis home, so he could spend as much time with his family as possible.

On Friday, the last day of November, the Police Department took a before-and-after photo to show what the officers looked like after a month-long progression of facial hair growth to being clean-shaven again. The officers raised money for Burrows when they weren’t shaving.

When asked what it felt like to donate to such a worthy cause as the Burrows family, McQuillen said, “Almost our whole department participated. It was a great idea. We want to help a family in need. We are all fortunate and blessed, and this is another way we can help out people around us.” 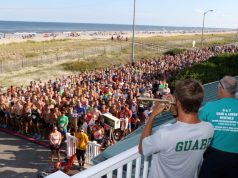 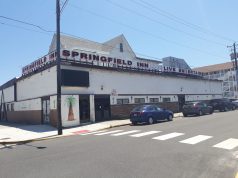 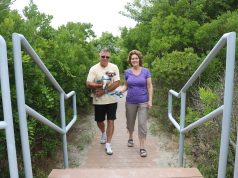