The Mike’s Seafood Run-Walk For Autism fundraiser in Sea Isle City generates more than $100,000 for the important cause, and this year the cause is getting a bit of early support.

Some of the past Polar Bear Kings and Queens are collectively hosting a fundraiser on Saturday, Jan. 18 from 6 p.m. to 9 p.m. at LaCosta Lounge, 4000 Landis Ave., with proceeds benefiting the run-walk, created by Mike Monichetti, owner of Mike’s Seafood.

Tickets cost $30 per person at the door or online and include a buffet provided by Mike’s Seafood and Dock Restaurant, complimentary drinks and music by the band LeCompt.

In addition to dining and entertainment, there will be a host of other activities, including raffles and live auctions.

“There will also be some other surprises,” said Kathleen Albright, the 2016 Polar Bear Queen who helped organize the autism fundraiser. “We’re going to have a fun night. It is one that you can’t miss. It will be well worth your time to support a great cause.”

Monichetti said in an interview Friday that he and his family were truly touched by the generosity of the past Polar Bear Kings and Queens.

“I think this is absolutely fantastic that all the kings and queens alumni decided to work together to make this the biggest and greatest event ever in raising funds and promoting autism awareness,” he said.

Albright said a group of former crown holders got together to help out Monichetti’s event.

“It is a group effort and the team of Polar Bear Kings and Queens is very busy getting ready for the biggest fundraiser ever,” she noted.

The colossal weekend culminates with the Run-Walk for Autism on Sunday, Feb. 16, which is part of the Polar Bear Plunge entertainment. Festivities also include a costume party on Feb. 15 preceding the plunge.

But this year is different.

For 12 years, LaCosta Lounge has hosted the weekend activities, including Monichetti’s Run-Walk for Autism. With the sale of LaCosta Lounge, it is unclear what will become of the weekend of events starting in 2021.

Albright said that is one of the reasons why they wanted to really make sure everything goes perfectly this year.

“It is the last time at the iconic LaCosta Lounge,” she said. “We are highlighting the fact that we have pooled our resources and efforts together to host a fun-filled, exciting night of fundraising to help the kids to live their best lives.”

Monichetti said while he will have to find another venue to hold the run-walk, he is certain of one thing: the last one at LaCosta Lounge will be memorable.

“To have the best band at the Jersey Shore to come, then throw in the buffet by Mike’s Seafood and Dock Restaurant and complimentary beverages by LaCosta Lounge, you will have one of the greatest nights of the winter,” Monichetti said.

Monichetti feels very strongly that the run-walk will continue to flourish as it has year after year, no matter where it is.

“God called me to do this work,” he said.

He and his wife, Jeannie, have four children, Mary Kate, 20, and teens Luke, Kara and Michael Jr. Kara and Mike Jr. have autism.

Autism is a general term for complex disorders of brain development. Depending on the severity of the disorder, autistic people may have difficulties with social interaction and communication. Some may also engage in repetitive behavior.

This year’s goal is to raise $150,000 for autism awareness, advocacy and family services.

One of the districts helped by Monichetti’s fundraiser is the Cape May County Special Services School District.

In a December letter provided by Albright from Assistant Superintendent Jamie Moscony, it detailed how much the run-walk means to the children with autism in the school district.

She continued, “Without these donations, our district would not be able to provide a number of specialized programs including our after school LEEP Program, Leisure Experiences for Exceptional People,” she said. “This program provides quality leisure experiences for special needs teens and young adults who would not otherwise have opportunities for after school recreation experiences.” 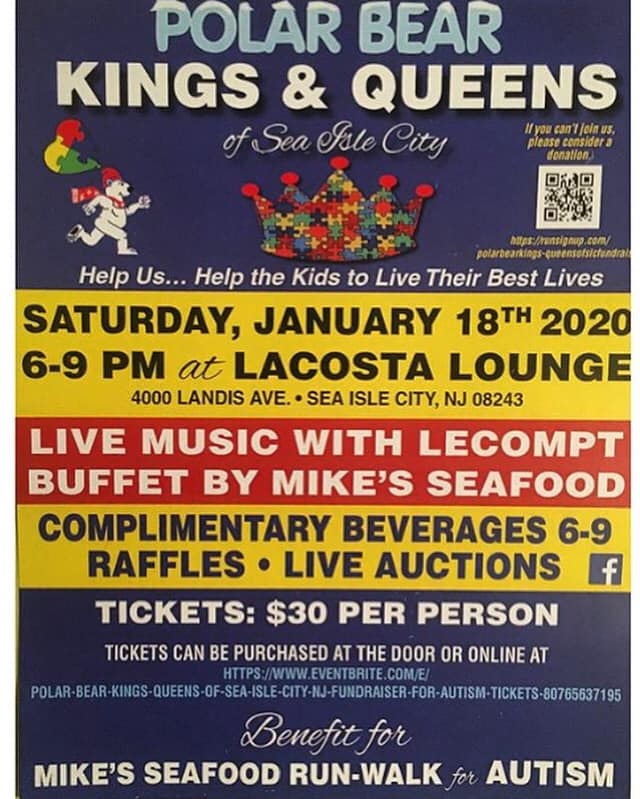