A “huge hump of sand” that runs for miles along the coastline is trapping the ocean, creating pools of water on the beaches in the process, City Business Administrator George Savastano explained.

To allow the water to flow back into the ocean, the city’s Public Works Department has been regrading the beaches every day between 4 a.m. and 10 a.m. while the tide is low.

Savastano called it a “daunting earthmoving problem.” The work includes cutting trenches into the beaches to channel the pools of water back into the ocean.

In some spots, sunbathers are being inconvenienced by having to walk around the pools of water to get to their favorite beaches, city officials said.

Some local residents have complained to City Council about the problem. At its meeting last week, Council received an update from Savastano on the city’s efforts to get rid of the pools of water.

The city has chosen not to take more radical action during the peak summer tourism season, such as completely shutting down stretches of the beachfront and using bulldozers to smooth out the sand, Savastano explained.

“I think we’re doing everything practical, reasonable and prudent given the environment,” he said of having work crews regrade the sand every morning.

Sea Isle’s entire 4.5-mile beachfront has been replenished thanks to a $40 million restoration project funded by the U.S. Army Corps of Engineers. 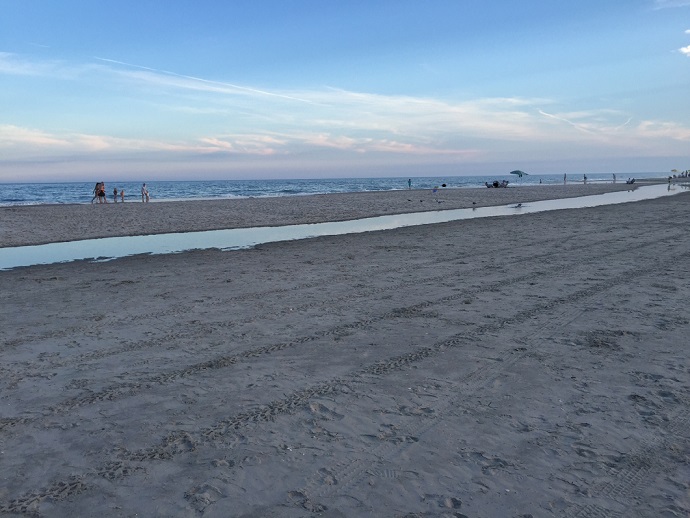 In some cases, badly eroded beaches that were only about 50 feet wide have grown to 300 feet wide, all because of the 2.9 million cubic yards of new sand deposited by the Army Corps of Engineers.

But at the same time, the mounds of new sand are trapping the ocean, creating the pesky pools of water.

“This is not uncommon with a beach rebuilding,” Savastano said of the pooling.

Savastano became intimately familiar with the dynamics of the shifting shoreline when he formerly served as an engineer with the Army Corps of Engineers. In that capacity, he oversaw beach replenishment projects in Cape May and Ocean City during the early 1990s.

Sea Isle’s wider beaches this summer seem to be popular with vacationers. The city is on pace to break last year’s record of $1.43 million in total beach tag revenue.

Through Aug. 7, revenue from beach tag sales was $1.32 million, about $13,000 more than the same time last year, Savastano reported.

He expressed hope that the upward trend will continue as the city heads into the final weeks of summer.