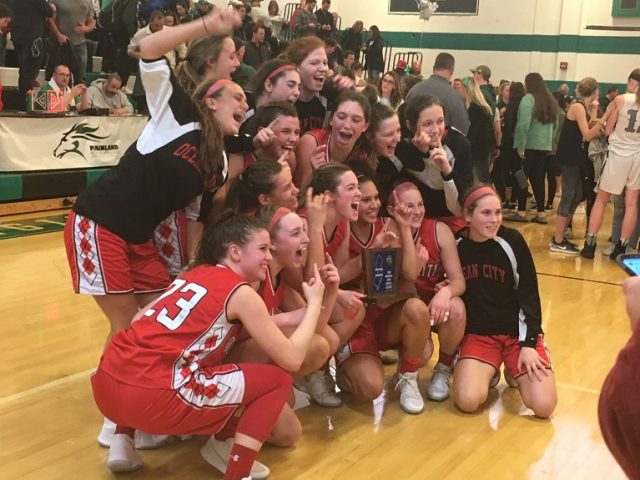 If at first –or second or third – you don’t succeed, try again. For the Ocean City girls basketball team, the formula paid off on Monday afternoon with a South Jersey championship.

The 2nd seeded Red Raiders (19-7) lost in three previous encounters to arch-rival Mainland Regional, all in overtime, including a stinging 41-39 defeat in the Cape Atlantic League championship game on February 24.

But all that was a distant memory on Monday afternoon with OC’s stunning 36-32 defeat of the previously undefeated and top-seeded Mustangs (28-1) in the South Jersey Group III championship game.

Played before a packed house at the Mainland gym, the Raiders looked poised throughout and in control, taking a 23-16 lead at the half. Danielle Donoghue’s buzzer-beating shot went in to punctuate the run and send the Raiders off to the locker-room with confidence at the break.  They would score only 13 points the rest of the way, but a lockdown defense enabled Ocean City to close out the contest and advance in the New Jersey State Athletic Association tourney.

With the win, the Raiders advanced to the South Jersey semi-final on Wednesday against the winner of Ewing and Allentown. The game will take place 7 p.m. at Deptford (Gloucester County) high school.

For Mainland, the game was a bad case of déjà vu. The Raiders took the sectional final over the Mustangs last year by a 38-31 count.  Most observers considered the Mustangs to be the favorite this time, but the game illustrated how difficult it is to beat a closely-matched and familiar opponent four times in one season.

The game began at a tense pace with Ocean City holding a 7-5 lead after the first quarter, but they outscored Mainland 16-11 in the second and 6-5 in the third. They withstood a Mainland rally in the final stanza to secure the victory and set off a wild celebration on the Ocean City bench and silencing the home crowd.

No Ocean City scorer hit double figures, but sharing the ball and balanced scoring were key. Emme Finnegan paced OC with 9 points on three field goals and three made foul shots, followed by 7 each from Donoghue, Delaney Lappin and ToriRolls. Kylie Wyers chipped in with 4 Abbey Fenton completed the Ocean City scoring with 2 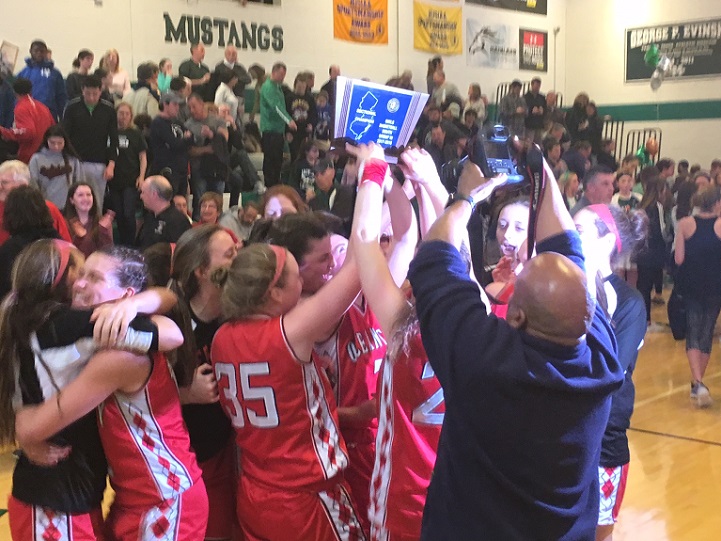 Mainland star Kylee Watson led all scorers with 14 and Gabby Boggs had 9. But the remainder of the Mustangs’ roster could muster only a combined 9 points against the strong Ocean City defense.

Anytime Ocean City and Mainland Regional hook up to do battle on the field or court, it’s going to be an intense battle. It’s been that way ever since Mainland opened in 1961 and the former Ocean City sending districts of Somers Point, Linwood and Northfield formed a new regional high school district and an instant rivalry was born. Located just across the bay from each other, OC and Mainland can count their season as a success regardless of record, if they defeat their traditional rival.

Monday’s battle at Linwood was the latest chapter in a series that defines the essence of high school sports.