Ana McDivitt, an adorable blonde girl just 3 years old, was called to the podium to accept her award for placing third in the beanbag-tossing competition.

However, it took some effort from the pint-sized child to climb up on the tiered podium so that the judge could drape a bronze medal around her neck.

The crowd of hundreds of children and adults at the Junior Olympics in Sea Isle City cheered while Ana looked on in amazement and smiled — a moment that her beaming parents will likely never forget.

While many vacationing families bring their children to the Junior Olympics, locals enjoy the event, too: Shown are Brynn Cunningham (4), Marie Mulholland (6), Charlie Thompson (4) and Ryland Thompson (2), all of Sea Isle City

The Summer Olympics at Rio de Janeiro in August will have world-class athletes and hundreds of millions of television viewers, but there is no way it will be able to match the cuteness of Ana McDivitt and the other children at the Junior Olympics

An estimated 600 to 700 girls and boys between the ages of 3 and 13 competed in running, jumping and throwing events at Dealy Field. The Junior Olympics has been a Fourth of July tradition in Sea Isle for at least 25 years.

“I have seen parents here who competed as children,” city spokeswoman Katherine Custer said. “We have had numerous generations. It’s wildly successful.”

The Junior Olympics, always held on Independence Day, was one of the centerpieces of Sea Isle’s family-friendly activities over the holiday weekend.

Sponsored by the Sea Isle City Yacht Club and the city’s Division of Recreation, the event has developed its own reputation as a summer tourist attraction for the beachfront town. 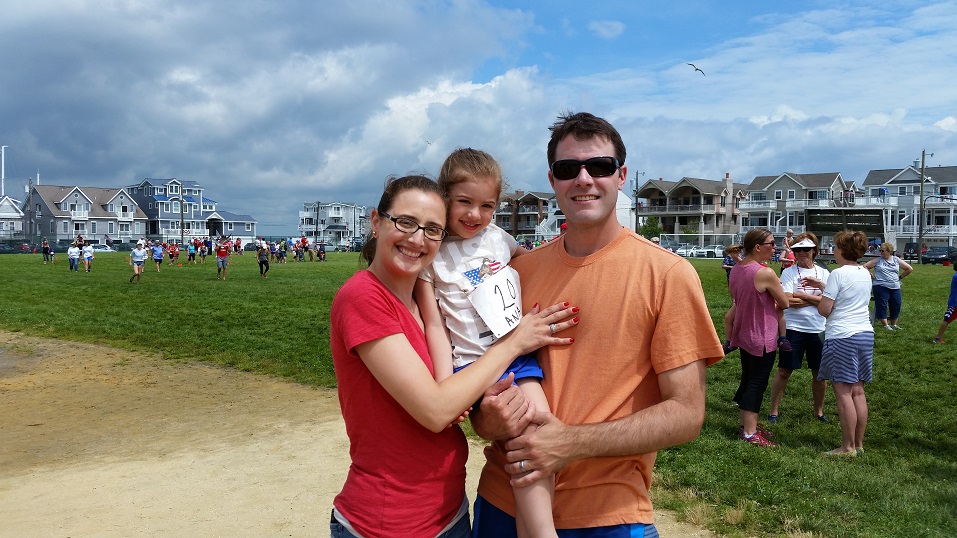 “They come from all over. We have seen people from as far south as the Carolinas and as far north as Maine,” said Jamie Mulholland, co-chair of the event and a former commodore at the Yacht Club.

J.B. Flora, the other co-chair and another former commodore at the Yacht Club, said the event usually attracts about 500 children, but has had more than 700 at times.

Mulholland noted that 150 volunteers from the Yacht Club joined with the children and parents to make the Junior Olympics a success.

“Getting close to a thousand people on the Fourth of July is a huge undertaking, both from the parents’ perspective and those who are participating,” she said.

The top three finishers in each competition are awarded Olympic-style medals while standing on a three-tiered podium, but every child receives a ribbon for participating.

Ana McDivitt, the 3-year-old who took home the bronze medal in the beanbag-tossing event, also competed in the running and jumping contests.

“I like the running, because I’m the fastest,” she said, giggling.

Her parents, Miriam and Rob McDivitt, of Philadelphia, come to Sea Isle every year for the Fourth of July celebration. This was the first time Ana was in the Junior Olympics.

“This is a cool activity for the kids to do,” Miriam McDivitt said. “It gives them a chance to have fun, win some medals and learn some sportsmanship.”

Joy and Mike Donnelly, down for the holiday from their home in Downingtown, Pa., watched as their son, Michael, 12, and daughter, Lily, 8, competed.

“They’ve been talking about it all week. They even got to bed early last night to get ready,” Mike Donnelly said.

His son, Michael, was surprised by the sheer number of competitors who turned out for the entire event. He faced dozens of competitors in his age group alone.

“I was expecting a lot of kids, but nothing like this,” Michael said. “All I wanted to do was to come out and have fun. I think the whole event was really fun.”