After last week’s storms, the ocean water temperature dipped for a day or two, then settled in the mid 70’s (currently 75 degrees). That puts us in very good summer fishing conditions!

Summer Flounder fishing has been very good, even with the larger Fluke moving offshore to deeper waters. Still, we’re hearing reports of keeper Flounder being hooked daily with a few up to the 9 pound range! That’s a fine fish!

Flounder being taken with minnows, cut squid, and bucktails (Pink remains the HOT color). Cut or live bait on the incoming tide is sure to land you a good variety.

Good spots to catch all these fish mentioned is the Townsends Inlet Park on the south end, Corsons Inlet on the north end (Strathmere), the south side of the Sea Isle Causeway, the bulkhead at 80th St and the 59th St fishing pier.

No summer doldrums on the beach right now! Beach fishing is very good! Kingfish currently rule the surf – another great summer for Kings! Also being taken are Croakers, Weakfish, Flounder, Snapper Blues, and even some Spanish Mackerel. An occasional Blowfish may be hooked as well.

Bloodworms on an over/under rig are the bait of choice for Kingfish, Weakfish, Snapper Blues and Spanish Mackerel.  Cut bait and clams on a weighted rig will also work. 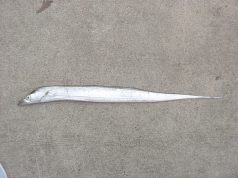 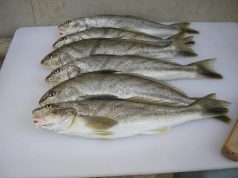 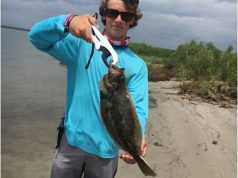