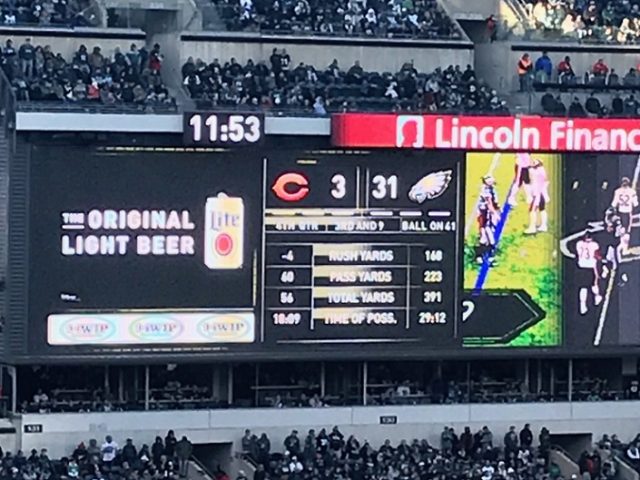 The refrain could be heard throughout the parking lots prior to the Eagles’ latest dominating win:

“Don’t jinx it man,” said one green-clad fan, who identified himself as “Mark from Mr. Laurel” as he downed a pulled pork sandwich and quaffed a beer. “I don’t want to hear any talk about the Super Bowl. There is still a lot of football left to be played.”

True, the Eagles are facing their toughest stretch of schedule following their 31-3 romp over Chicago at Lincoln Financial Field. They have three straight road games against the 7-4 Seahawks, currently the 7th seed in the NFC; the 8-3 Los Angeles Rams, seeded third as of Sunday; and the woebegone New York Giants, who still always manage to give the Eagles a hard time.

They don’t return home until a Christmas Day matchup against the Oakland Raiders.

They also moved four games ahead of Dallas in the NFC East and can officially clinch the title and a home playoff game, if Washington can knock off Dallas on Thursday night. Even if Dallas prevails, Philadelphia can clinch on Sunday with a win at Seattle.

“Don’t pinch me. If this is a dream I don’t want to wake up,” said Trent from Toms River, who declined to give his last name.

Despite the lopsided score, the Eagles did not look sharp in the first quarter of the game, played on a sun splashed afternoon with unseasonably warm 50 degree temperatures for most of the game.

After Carson Wentz connected with Zach Ertz on a 17-yard strike and Jake Elliott came off the concussion protocol to kick the extra point, they appeared on their way early. But lost fumbles by Malcom Jenkins on an interception return and LaGarrette Blount at the end of a rumbling 35-yard run prevented Philadelphia from putting the game out of reach early.

But the first-quarter mistakes proved to be a brief stay of execution for the Bears, who fell to 3-8 with the loss.

Wentz connected on a 15-yard pass and run by Nelson Agholor, capped by an acrobatic hurdle of the final defender and an airborne somersault into the endzone.

Elliott tacked on a 39-yard field goal and Wentz hooked up with Alshon Jeffrey for an eight-yard TD pass, his third of the day and a league leading 28 for the season. He needs just four more TD passes to tie the Eagles record of 32, held by Sonny Jurgensen since 1961.

The score was 24-0 at the half and the Eagles went into cruise control from there. Chicago averted the shutout with a third quarter field goal, and the Eagles added a fourth quarter TD and extra point to reach the final score.

“This is what good teams do,” one fan said afterward. “They do what they have to do to beat a mediocre team, even if the win is ugly.”

Few would describe the performances of Wentz, the frontrunner for league MVP; Blount, who had 97 yards on 10 carries; or Ertz, who had 100+ receiving yards on 10 catches, as anything but beautiful.

While the Eagles offense finally got on track, the defense turned in another stellar effort. They held the Bears, who came into the game with the sixth best rushing offense in the league, averaging 132 yards per game, to just six rushing yards for the game.

If Eagles fans aren’t brave enough to talk Super Bowl yet, the elusive Lombardi trophy should clearly be on their minds.

No Trash, Recycling Collection on Holiday

No Trash, Recycling Collection on Holiday