Today artists come from all backgrounds and lifestyles. Many of them create their work in a permanent medium, but some artists use temporary substances to express themselves. One of these temporary artists is Bernie Feeley, who uses sidewalk chalk to create what he calls his “legal graffiti.”

In Sea Isle City many people both local and tourist alike enjoy Bernie’s artwork. His drawings can be seen on the promenade at the end of JFK Boulevard. To all who walk past his work, the art is an amazing sight to see for the first time or for the one millionth time.

Not all artwork is temporary though, and every great artist has their darker days. “Back when I was on 76th street, Joe Taylor was one of my neighbors and he was an artist, like a crazy good artist. We started going to dance clubs up in Philly and we got really interested in graffiti. The murals, not just people signing their names,” says Bernie. “Along side him I began and started to get better and better at it, and there was a whole sub-culture for graffiti. Graffiti artists, they hang out together. Everybody shares their sketchbooks and all.”

He says that he began a little rough, but his neighbor Joe Taylor had influenced his style and love for the sub-culture.

“I started doing pretty well with that, and got pretty good at aerosol (spray paint) graffiti,” Bernie explains. “Then after getting in trouble a few times, I started seeing this guy in France that was using really expensive pastels to do those 3D sidewalk designs. I knew I couldn’t do that, and more importantly I knew I couldn’t afford it either, so I just went to the local drug store and got some Crayola sidewalk chalk, and started doing my best crack at it.”

Bernie, who signs all of his artwork with his tag “PROB”, says that he practiced a bit and loved the sidewalk chalk. He would find different places to try out different designs. “Then, this spot right here at the end of the boulevard has the white concrete, and since it’s the only place on the boulevard that does, it kind of became my home turf to start doing murals on.”

Everyone who walks by him while he works takes a moment to appreciate the effort it takes to create such large and amazing pictures. For some tourists this weekend’s design was the first thing they saw on their way into town for vacation. For others, it was the last thing they saw at the end of their trip, and Bernie says he wouldn’t have it any other way.

While working on a project, Bernie was even able to be a part of one couple’s special moment. Pat Devlin proposed to Linda Engsell on Saturday August 26th under the pavilion on the promenade at JFK Boulevard, so Bernie dedicated the project he was working on, to the two of them. He added their names and drew a design for the two of them on one of the days they will tell their kids about.

“The people love it!” Bernie says. “Everybody does. The Cops, they love it. The kids, they love it and I even sometimes get one or two of them involved. So it just kind of became my hobby. Instead of sketching it in a notebook, I do it on the boardwalk, and the response from the people is amazing.” 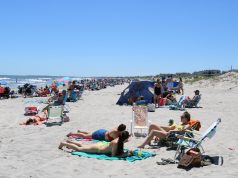 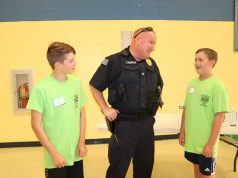