Barbara Steele gazed at the overcast skies Saturday that cloaked Sea Isle City in a gloomy grayness and wondered why it was happening again.

As the organizer of the annual Harborfest celebration, she has endured three straight years of dreary weather that has scared away the crowds or forced the cancellation of the event altogether.

But as tempting as it was to curse the rain Saturday, Steele and others made the best of things by simply moving the festivities indoors in a bit of improvisation

“This year, we thought we would salvage what we could,” said Steele, event coordinator for the Sea Isle City Chamber of Commerce and Revitalization, the Harborfest sponsor.

An abbreviated version of Harborfest unfolded inside the Lobster Loft restaurant along the 42nd Place waterfront.

After rain cut Harborfest short in 2014 and caused its cancellation last year, the Chamber of Commerce made preparations to shift the celebration indoors if the damp weather returned this year, Steele said.

Normally, thousands of people show up in ideal weather, Steele noted. Saturday’s turnout was considerably smaller than that, but the parking lot across the street from the Lobster Loft was still crowded with cars.

However, the vendors that were supposed to line the street outside stayed home. Organizers also canceled the blessing of the fishing fleet, one of the traditions of the event.

Inside the Lobster Loft, the focus was on the food. Festival-goers lined up for a chowder-tasting contest that featured seven soups made by local restaurants. 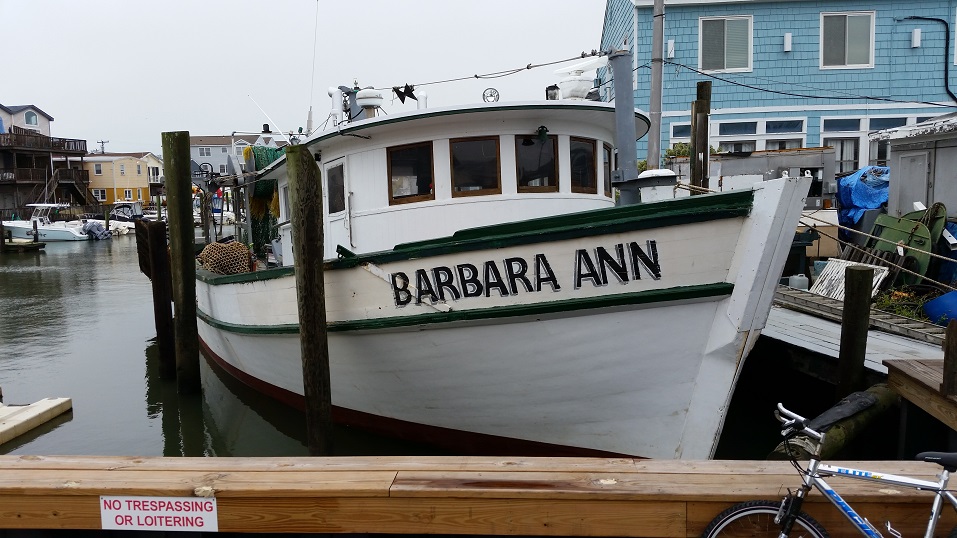 “It’s delicious,” exclaimed Chrissy Higgins, of Media, Pa., as she sampled some New England-style clam chowder. “This is very good — nice and chunky. It has nice, big chunks of clams.”

Higgins was joined in the chowder-tasting contest by her sister, Julie Formica, of Chalfont, Pa. Higgins has a summer home in Sea Isle.

Although Harborfest is a culinary celebration, it also pays tribute to Sea Isle’s commercial fishing industry. A plaque on the wall at the city’s Welcome Center credits the fishing industry for saving the town from economic collapse, particularly during the Great Depression and World War II.

“Sea Isle started out as a fishing community, so this festival is a way of celebrating that history,” Steele said.

The city’s historic Fish Alley area along the Park Road waterfront serves as an enclave for longtime seafood restaurants and commercial fishing boats.

During Harborfest, Rob and Tammy Zalokar, along with their 10-year-old son, Aiden, and his 10-year-old friend, Braydon Grabowski, marveled at the fishing boats in the lagoon.

The Zalokars live in Coopersburg, Pa., and were spending the weekend in Sea Isle at a relative’s home. Tammy Zalokar said her family was surprised to learn of Sea Isle’s fishing fleet.

I didn’t realize that the harbor had so many fishing boats like that,” she said.