It was a great day for the Irish and friends of the Irish. And today should be no different.

Sea Isle City’s 10th Annual Irish Festival got off to a rousing start yesterday, drawing thousands to the downtown area and Fish Alley, despite cool temperatures and threatening skies. Officially, the activities took place on JFK Blvd between Landis and Central Avenues, but with its large Irish-American population, Sea Isle seemed especially green on Friday and Saturday.

Vendors hawked all things Irish and all things green. Green Phillies, Eagles, Flyers and Sixers shirts.  Shamrock shirts. Green “ugly sweaters.”  Irish Flags.  Leprechaun statues. If it had an Irish theme it was probably for sale.

There was also Irish music, Irish dancing and all types of food, Irish and non-Irish. But mostly there was family fun, fellowship, lots of smile and laughs.

At LaCosta Inn’s parking lot, vendors set up a tent city of sorts and the lot became a makeshift beer garden.

Lynn and Hannah Desmond were staffing a tent selling all varieties of T-shirts. They did well at the event. They mentioned that they have been on-hand for each and every Irish Festival Weekend since its inception. They did a brisk business selling a wide variety of t-shirts: Irish shirts, silly shirts, sports shirts, and all kinds of political shirts (the Donald Trump shirts & the Eagles shirts were the big sellers of the day).

Another t-shirt vendor’s named Todd Fayer (Fayer’s wholesale distributors) concurred.  He said “I do not want to get political. I have all kinds of shirts. That said, the Trump shirts really seem to be the big seller today”.  All of his shirts were  priced to move. Most of them are $5 and the long sleeve are $12.

The event kicked off with Irish entertainment at the LaCosta Deck with the band West of Galway, followed by Round Tower. The hugely popular Blackthorn rocked LaCosta Lounge from 9 p.m. to 1 a.m.

The same three bands rocked out yesterday in the outdoor tent and deck, and Split Decision took over the Lounge.

Live entertainment also took place at the Lobster Loft on Friday and Saturday with the Insiders and FunZaLuv.

Today, the festivities continue in the morning and continue right through 4:25p.m. when the Eagles kick off their game against Pittsburgh. West of Galway will play on the LaCosta Deck from 1 to 5 p.m.

When the Eagles game starts, a wide screen TV will show the game on the LaCosta Deck.

We hope our readers will take advantage of all the features and attractions. We wouldn’t want anyone to be green with envy for missing all the fun. 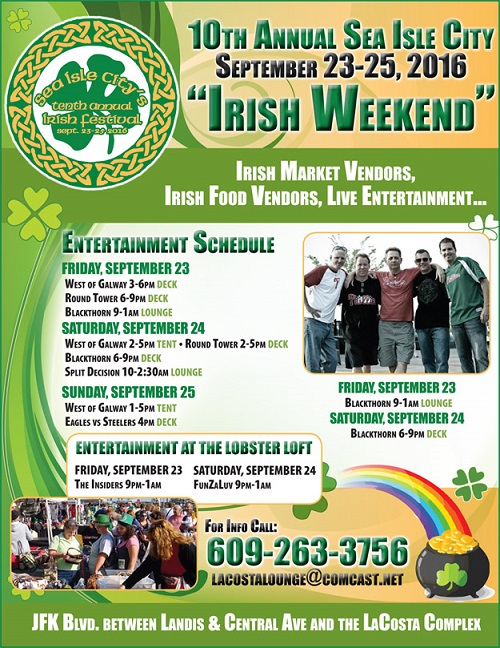