The next time you see a young dishwasher or lifeguard or bartender or the guy who rents you a bicycle, you may want to think about a man who is helping to transform Sea Isle City these days.

Christopher Glancey held all of those jobs while spending his summers in Sea Isle during his youth.

The 43-year-old Glancey now juggles quite a few other job titles. He is a developer, a real estate broker, a business owner and the president of the Sea Isle City Chamber of Commerce and Revitalization.

“It’s difficult on some days,” he said when asked how he has enough time to fulfill all those responsibilities. “But I think the only way I can do it is to have good people in my life to help me accomplish all those things.”

Recently, Glancey celebrated another achievement with the grand opening of The Dunes, an upscale condominium, restaurant and banquet complex that takes up the entire block of Landis Avenue between 86th and 87th streets near Townsends Inlet.

Joined by Mayor Leonard Desiderio and Councilman John Divney, Glancey and his partners Dave Magrogan, Bob Morris and Joe Ragusa held a traditional ribbon-cutting ceremony to mark the debut of what is expected to be Sea Isle’s next major attraction. Desiderio called The Dunes a “showplace.”

The Dunes project was developed on the site formerly occupied by Busch’s Seafood Restaurant, an iconic landmark that traced its roots in Sea Isle back to the 1880s.

Desiderio noted that Busch’s was in business for 132 years before closing down. Glancey’s group, 86th Street Development LLC, bought the property. The restaurant was demolished in 2014 to make room for The Dunes, which the mayor believes will have its own Busch-like tradition and longevity. 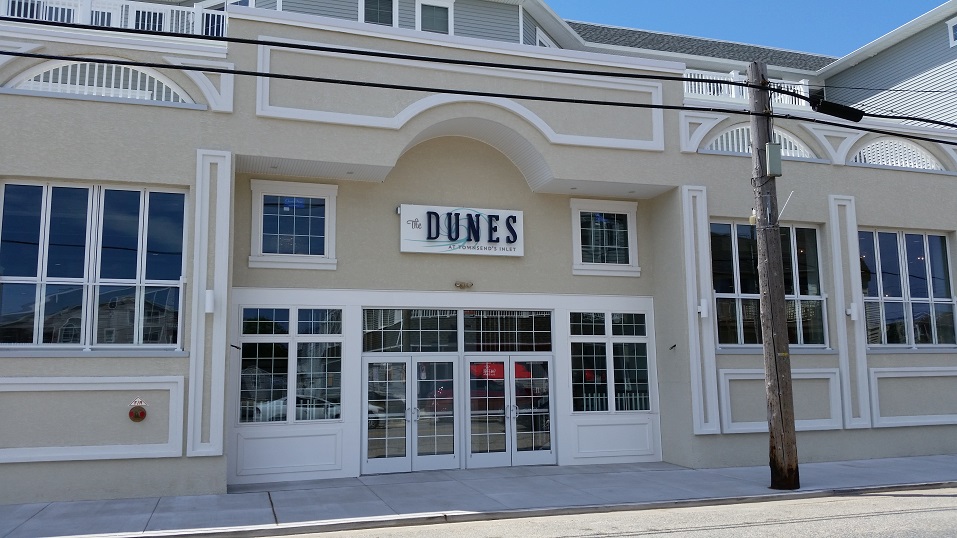 “We wish you 132 years of success here in Sea Isle,” Desiderio told the developers. “You are now part of the Sea Isle restaurant family.”

Desiderio then turned to Glancey and paid him a compliment.

“Chris, what can we say about you? You’re the guy who puts things together,” Desiderio said.

The Dunes project was originally approved in 2010, but the lingering effects of the national recession delayed plans for opening a new restaurant, Glancey explained.

Overcoming the challenges, Glancey, Morris and Ragusa teamed up with restaurant operator Dave Magrogan to complete a project that combines commercial and residential space in a three-story building.

Magrogan, 43, who has a summer home in Sea Isle on 66th Street, said he met Glancey seven or eight years ago and began talking about doing a project together a few years later.

“I like to do business with good people. Chris is one of the best,” Magrogan said. “He’s a great person.”

Glancey said he and Magrogan share the same entrepreneurial spirit and a similar desire “to be successful in life.”

Glancey added that he and Magrogan, along with Morris and Ragusa, also share the same love for Sea isle.

The similarities don’t end there. All of the partners, Glancey noted, come from blue-collar backgrounds in the Philadelphia area. Glancey grew up in a West Philadelphia rowhouse.

“Everybody in our group all came from humble beginnings,” Glancey said.

Glancey’s family ties to Sea Isle date to 1951, when his grandfather, James Henry, bought a home on 45th Street.

Glancey spent all of his summers in Sea Isle during his youth. His first summer job was as a dishwasher at the old Vince’s Restaurant at John F. Kennedy Boulevard and the beach. Over the years, he also worked as a lifeguard, a bartender and a bike-rental shop employee.

“Every job there was, I did it,” he said, laughing.

Glancey returned to Sea Isle every summer, even while he was in college, because “this was always my home base.”

He moved to Sea Isle full time in 2000. He lives in a townhome above Diamonds Liquor Store, one of the local businesses he owns.

As the president of the Chamber of Commerce and Revitalization, he serves as the leader and voice of Sea Isle’s business community. On Tuesday, he appeared at a City Council meeting to urge local residents, business owners and the Chamber to collaborate on an updated master plan that would create a unified vision for the town’s growth over the next 10 years.

His Dunes project is expected to play a significant role in the development and growth of the city’s south end and Townsends Inlet area — in effect, taking up where Busch’s left off.

“The goal we set from Day 1 was to create a showpiece for Townsends Inlet,” Glancey said. “We had a great tradition with Busch’s and are very proud to follow in those footsteps. We want to bring a new tradition to Townsends Inlet.”