Michael Testa said it was “surreal” and “humbling” to assume his new role as a state senator representing New Jersey’s 1st Legislative District.

Those emotions didn’t stop Testa from hitting the ground running on his first full day in office.

Testa, whose district consists of Cape May County, Cumberland County and parts of Atlantic County, issued several press releases since taking the oath of office on Thursday, including an explanation of one of his first major votes, a vote against spending $9.5 million for family planning services and a statement mourning the passing of Buena Vista Mayor Chuck Chiarello.

Testa said that as a freshman senator he was not given an office in the Statehouse. He was nevertheless somewhat awestruck taking the oath and knowing he’d be working in a building where so much history had taken place, he said.

“Being there brought out an overwhelming sense of pride and love for New Jersey,” said Testa, a resident of Vineland. “Standing in the Senate Room and seeing all the pictures of (legislators who have preceded him) you think about all of the things that have happened there.”

Testa said he is grateful for the opportunity to serve a constituency that elected “a true conservative,” and that he will work hard to deliver on the needs of the district.

“I want the people who voted for me to see I’m responsive to the message they sent in a historic election, and I want to earn the trust of those who did not vote for me so that they would consider voting for me in the future,” he said.

“As much as I like being in Trenton and being part of the legislative process, I also enjoy being in the district and talking with those I’ve been elected to represent,” he continued.

The 43-year-old senator earned his B.A. in psychology and his law degree at Villanova University and Villanova’s Charles Widger Law School, respectively. He has an advanced law degree in Trial Advocacy from Temple University’s Law School.

Testa said he felt he had a very good knowledge of the district’s geography, although campaigning had allowed him to learn more about “some of the delightful nooks and crannies of the district and engage the residents of those areas” to better learn specific needs and ways to serve those folks.

He also said in the weeks ahead he would articulate several key initial agenda issues he would be working toward:

In announcing his opposition to the spending on Family Planning Services, Testa said: “As the father of three young children, I am proudly pro-life and don’t believe our tax dollars should be used to support organizations whose primary focus is providing abortions.”

Presumably, he said, “Planned Parenthood would be one of the largest recipients of this funding.”

In recognizing the death of Chiarello, Testa called the former mayor “a dedicated public servant for more than 28 years (who) prioritized the residents of Buena Vista over himself” and praised Chiarello for courageously continuing to serve his township from his hospital bed as his health deteriorated. Testa said he had a close connection to the township because that is where his parents reside.

Testa was sworn into office Thursday with his family by his side. His wife, Julie, is a former Miss New Jersey, whom Testa describes as “the engine who makes the Testa family go.” She is a school librarian in Vineland. The couple has three kids: daughters Eva Marie and Sarah, and son Tripp. 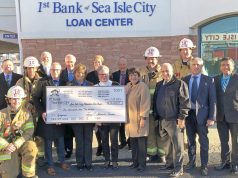